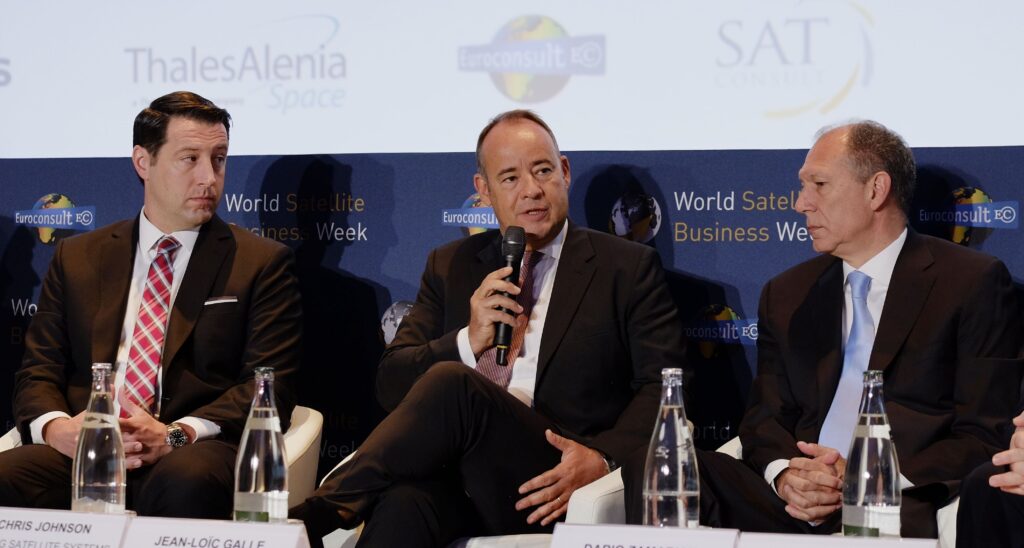 WASHINGTON — Thales Alenia Space will restructure over the next few months as part of an effort to revamp its telecom satellite manufacturing business, which is projecting a 10% drop in sales for the year, its majority shareholder said Aug. 4.

Satellite operators are furthermore demanding more advanced “flexible” spacecraft that can change the size, shape, power and location of their beams as their business plans become less dependent on television broadcasting and more on constantly shifting demand for internet connectivity, Thales said.

Thales Alenia Space builds a wide variety of spacecraft, including science missions for European space agencies, weather satellites for the European Union, and pressurized cargo modules for Northrop Grumman’s Cygnus supply vessels. But the recent reluctance of geostationary operators to buy new satellites is weighing down on the company’s financial performance.

Thales Group reported 1.76 billion euros ($1.94 billion) in Aerospace revenue for the first six months of 2019, down 14 percent from the same time last year. Aircraft avionics, which Thales Group includes in its Aerospace division, grew by an unstated amount, but was not enough to offset commercial satellite losses, the company said.

Bouchiat said Thales Group projects 40-50 million euros in restructuring costs during the second half of this year to “adjust our overall headcount in our space business.”

Thales Alenia Space has won three of 10 comsat orders this year — one from Indonesian operator PSN for a broadband satellite called Satria, and Hisdesat’s two SpainSat NG satellites it will co-build with Airbus Defence and Space. But revenue from new satellite orders doesn’t peak until two years after booking, meaning their effect won’t be felt in the near term, according to Thales Alenia Space CEO Jean-Loïc Galle.

Galle said Thales Alenia Space is committed to doubling down on research and development, accepting that spending will hurt earnings for the next two years.

“Based on our discussion with many operators, we have decided to complement the [very-high-throughput] satellites with a new fully digital satellite product line that will deliver the total mission flexibility that satellite operators now require,” Galle said. “The investment to develop this new satellite, this new solution, will temporarily weigh on our profitability in 2020 and 2021.”

Most if not all of the world’s top satellite manufacturers are investing in digitizing satellite payloads so operators can more easily adapt their services to changing market conditions. Galle said Thales Alenia Space has invested 300 million euros in telecom research and development since 2013, helping the company win orders like the half-terabit Konnect VHTS satellite Eutelsat ordered last year.

Konnect VHTS, Galle said, will have “the most powerful onboard digital processor ever put in orbit” when it launches in 2021.

Galle said Thales Alenia Space’s projections don’t include any “jumbo” broadband megaconstellation orders, which could be a massive source of business.

Thales Alenia Space partnered with Maxar Technologies in a competition with Airbus Defence and Space to build a megaconstellation for Canadian operator Telesat, which wants 300 low Earth orbit satellites. The company is also a frontrunner to build LeoSat’s constellation of 84 to 108 broadband satellites. Galle mentioned neither during his presentation, however.

Galle said he anticipates a low- to mid-single digit margin in gross earnings in 2021, with a return to high single-digit growth by 2023.

Outside of commercial telecom, other parts of the space market show growth potential. Galle said the European Space Agency is expected to approve a significant budget increase at its ministerial council in November. The French military is also expected to increase space spending, he said.

Thales Alenia Space is building the ground segment for the French military’s Syracuse 4 satellite program, and received an order in July to build the defense-focused Ital-GovSatCom satellite under contract from the Italian Space Agency.

Half of Thales Alenia Space’s revenue comes from civil space projects, according to a company presentation. Another 20% comes from military customers, with commercial counting for the remaining 30%.

Bouchiat said Thales Alenia Space has also benefited from the struggles of another prominent satellite manufacturer.

“Maxar, who used to be the market leader, has clearly dropped in terms of market share,” he said. “That trend obviously had a positive impact on us.”

Maxar was close to selling off its geostationary comsat business last year, but decided in February to restructure Space Systems Loral instead, with a focus on smaller satellites and government projects.

Thales Group was able to offset declines in it space business thanks to its 4.8 billion euro acquisition of Gemalto, a digital identity and cybersecurity company, in April. Patrice Caine CEO of Thales Group, said Thales Group’s 7 billion euros in revenue and 8.2 billion in sales for 2019’s first six months were both up roughly 10 percent thanks largely to the integration of Gemalto.