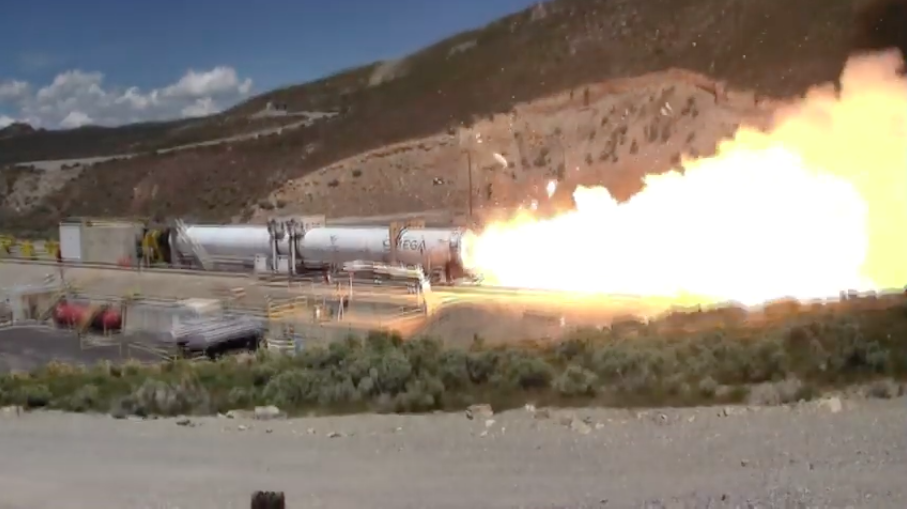 WASHINGTON — Northrop Grumman on Thursday conducted a full-scale static fire test of the first stage of OmegA, the company’s new rocket it is developing for national security missions. Company officials called it a successful test although it appeared that something went wrong near the end when sparks and burning debris were seen coming out of the nozzle.

More than 12 feet in diameter and 80 feet long, the first stage fired for 122 seconds at the company’s test facility in Promontory, Utah. The static fire produced more than two million pounds of maximum thrust — roughly the equivalent to that of eight-and-a-half jumbo jets. The test verified the performance of the motor’s ballistics, insulation and joints as well as control of the nozzle position, Northrop Grumman said in a statement.

“What we observed today was successful test,” Kent Rominger, Northrop Grumman’s vice president and capture lead for the OmegA launch system, told reporters at a news conference following the test.

Rocket motors are tested at high and low temperatures, he said. This test was at a high temperature of 90 degrees “so you get a little bit higher thrust,” Rominger said. “It appears that everything worked very well. At the very end when the engine was tailing off, we observed the aft exit cone, maybe a portion of it, doing something a little strange that we need to go further look into.”

A large plume of black smoke seen during the test was normal, Rominger said. When a motor burns out on the ground in tests, black smoke is expected whereas in space it’s a much cleaner burnout.

Rominger would not confirm whether a piece or pieces of the aft exit cone came apart. “We have to dig into all that data, analyze it to see what happened,” he said. The nozzle in OmegA’s C600 first stage motor is a commercial nozzle that is different than the one used by NASA’s Space Launch System, he said.

Michael Sanjume, chief of the Launch Enterprise Acquisition Division at the Air Force Space and Missile Systems Center, said the Air Force will work with Northrop Grumman to analyze the data. “We view this test as an integral part of the development process,” said Sanjume.

Rominger said the work required to analyze the results of Thursday’s test will not affect the planned schedule for a full-scale static fire test of OmegA’s second stage. That test should take place in August or September, he said.

The first flight of the OmegA rocket, scheduled for 2021, will employ a C600 first stage and a C300 second stage rocket motor. The second flight of OmegA will have the C600 and C300 configuration, with the addition of two GEM63XLT strap-on rocket motors.

Last October, the U.S. Air Force awarded Northrop Grumman a $792 million Launch Service Agreement contract to complete the development of OmegA and the required launch sites. The company will compete in the National Security Space Launch Phase 2 Launch Service Procurement competition that is now under way. The Air Force plans to select two launch providers in 2020. The other contenders are Blue Origin, SpaceX and United Launch Alliance.