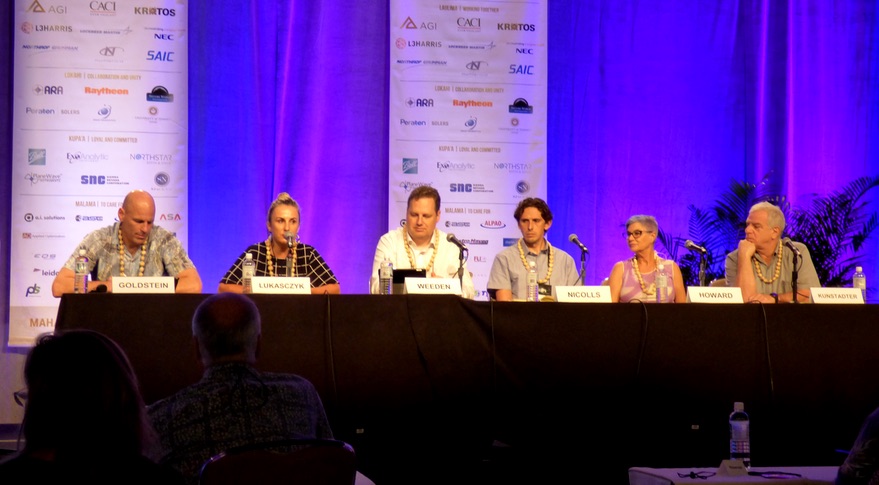 WAILEA, Hawaii — With satellite operators doing a poor job complying with guidelines to deorbit their satellites, incentives or even regulation may be inevitable to address concerns about orbital debris and satellite collisions.

During a Sept. 19 presentation at the Advanced Maui Optical and Space Surveillance Technologies, or AMOS, conference here, Francesca Letizia, an engineer at the Space Debris Office of the European Space Agency, presented discouraging findings from the agency’s latest Space Environment Report, published in July.

While international guidelines call for operators of satellites in low Earth orbit to deorbit them within 25 years of the end of their mission — a timeframe many in the industry now believe is too long — many operators are not complying. At altitudes high enough where satellites are not “naturally compliant,” meaning that atmospheric drag alone isn’t sufficient to deorbit satellites with 25 years, only 15–25% of satellites attempt to comply.

Satellites at those altitudes constitute 50% of all the satellites in LEO and 60% of the total mass of objects in LEO. “These objects, if not disposed, can fuel the Kessler Syndrome,” she said, a scenario where collisions in low Earth orbit set off a chain reaction of other collisions, accelerating the growth of debris. “The current level of compliance is not sustainable.”

Such deorbiting guidelines alone do not carry the force of law, although in some countries adherence to the guidelines is part of a licensing process. But other experts said that additional measures may be needed to encourage responsible behavior in space.

Chris Kunstadter, global head of space for insurer AXA XL, said he’s long pushed for satellite operators to add “beacons” to their spacecraft, small transmitters that provide a uniquely identify a satellite and make it easier to track. Satellites in LEO, particularly in higher orbits, should also have propulsion, he argued.

Insurance can provide an incentive for operators to adopt good behaviors like those measures. “We believe that people who use the available technologies to more than meet the minimum standard deserve recognition,” he said. That’s been challenging recently because of the sharp drop in rates, but as rates rebound insurers can now “differentiate” among customers, rewarding those who do take such measures.

“We have the ability to give that ‘good driver’ discount,” he said. “We would like to see more people try to get that discount.”

Incentives alone, though, may not be sufficient. Kunstadter and other panelists at the conference said that more binding requirements or regulations are inevitable at the national or international level to turn best practices into binding rules.

One issue it to make sure all satellite operators, from both government and industry, have a say in any such rules. Diane Howard, chief counsel for space commerce at the Department of Commerce, said an interagency group has been working on an update to U.S. debris mitigation guidelines that should be done soon. One issue, she said, “how to make these standard practices relevant to the private sector.”

“Requirements are something that should come from best practices,” she said. “They should be grounded in the realities of operations. They shouldn’t be abstractions that are imposed, and they should be organic.”

“Certain requirements, I think, are inevitable,” said Agnieszka Lukasczyk, senior director for European affairs at Planet, a company that operates a constellation of more than 150 Earth imaging satellites. She cited as a “very positive change” a growing willingness by governments to involve companies in the development of guidelines and requirements.

“What I am worried about, though,” she added, “is that when we’re talking about requirements, they really need to be international. We’re talking about a global space with all kinds of different players who can all cause a mess.”

“I think it’s important to implement requirements now” as a defense against more onerous regulations that could be imposed in the event of a catastrophic accident, Kunstadter said. “When that inevitable collision happens, and we’re sitting in front of a congressional committee with some very angry congresspeople, imposing on us some very strict requirements, that’s when we want to be able to say that we already have a regime in place.”