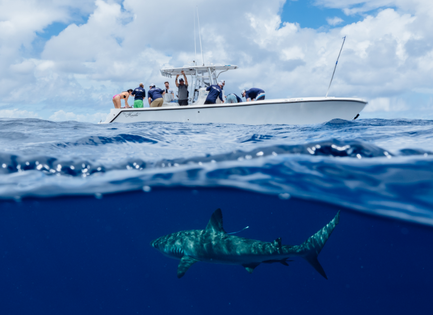 Conducting research on the movements of sharks is not easy. The animals move around a lot, spend their entire lives underwater, and can be difficult to find – particularly in areas where they face the threat of overfishing. What about finding support, funds, and partners to enable the work in the first place? Also, challenging. However, the global interest in oceans seems to be at an all time-high, and research groups such as Beneath the Waves are connecting the scientific, private sector, and philanthropic worlds in exciting new ways, paving the way for the next wave of ocean conservation efforts.

People are excited by technology, and one of the most common ways that shark researchers can track the movements of these animals – acoustic telemetry – is the focus of a large collaborative effort in the Bahamas.

Researchers of Beneath the Waves take a breather after successfully tagging a shark in Bahamian waters. The tag the shark has on will provide useful information to where it goes, helping scientists further protect it.

“This is a tracking system that uses acoustic tags on the animals, and acoustic receiver stations established sub-surface around their habitats. The tags intermittently transmit a coded acoustic signal, and when the animal is within acoustic range of the receiver, this signal is decoded and logged with a time and date.  The receiver networks are periodically downloaded and from this we can reconstruct the sharks’ movements over time,” said Steven Kessel, Director of Marine Research at the Shedd Aquarium (USA), who is collaborating with Beneath the Waves.

The tags can either be attached externally to the animal, such as on a dorsal fin, or surgically implanted into their body. Big sharks tend to get bigger tags, and a long-lasting battery can allow researchers to track the same individual for up to 10 years and give insight into their long-term movements and use of protected areas. For this reason, Kessel believes the best option for tagging sharks is implanting it into the shark so it can be retained for a long time. The team makes a small incision (around 1 – 1.5 inches in length) into the shark’s body cavity, implants the tag, and then sutures the incision closed. It’s a quick procedure that can be done in a matter of minutes and this quick turnaround time means the shark will be less stressed.

This collaboration also goes ‘under the hood’ to look at shark physiology and how it may be used to refine protected area design. Project collaborator Oliver Shipley of Stony Brook University, is collecting multiple samples of shark muscle, fin, and blood to analyze them on an isotope ratio mass spectrometer back in the laboratory. “This machine analyzes the ratio of heavy-to-light carbon and nitrogen stable isotopes of each tissue type, relative to a certified reference standard. We analyze different tissue types with variable metabolic rates because they provide an indication of shark resource across different time frames. Muscle tissue, for example, provides an indication of average resource use over approximately 1 year, whereas blood plasma provides an indication of resource use over 40 – 60 days,” said Shipley over e-mail.

Scientists of Beneath the Waves do not only measure the sharks– they also take a number of samples from the animal!

Sharks are highly migratory and move considerable distances, which means they are usually found throughout multiple ecosystems in their lifetimes to support their energetic requirements. Through statistical modelling approaches, Shipley and other researchers hope to use stable isotopes to derive probable contributions of prey items originating from multiple ecosystems, which in turn tells us how important each ecosystem is in supporting shark biomass. This can allow for more direct conservation and management of key ecosystems, as the stable isotopes can help identify the critical habitats which support sharks. Shipley explained: “This in turn means researchers can provide recommendations regarding locations/habitats that warrant further protection to help support healthy shark populations. In the Bahamas, this work directly feeds into existing plans to expand and refine the network of marine protected areas.”

“Advancing our understanding of shark populations that inhabit or use the waters of the Bahamas is an absolutely monumental task, and far too much for one single research group to take on alone. There are many groups studying sharks in The Bahamas, and only through active and coordinated collaboration can we effectively advance shark research in the region,” said Kessel.

The shark populations in the Bahamas are some of the richest and healthiest in the entire Northwest Atlantic thanks to the government designating its waters a ‘Shark Sanctuary’ in 2011. Nearly 640,000 km squared area of the northwest Atlantic is now a safe haven for sharks and a shark researcher’s dream. “The Bahamas is important not only for sharks that remain resident within the national waters, but also for more transient species that can still benefit from the Shark Sanctuary’s protection while they are present in its waters,” Kessel remarked.

Researchers of Beneath the Waves measuring a shark while it is safely tied to the boat.

This project was actually catalyzed on a shark tagging trip in early 2018 with Maverick1000, a group of leading entrepreneurs and dynamic business leaders. “Working with the team of shark researchers, industry leaders from Maverick1000 were able to truly understand and immerse themselves in understanding and experiencing the issues facing the ocean. Only from this immersive learning could they could create innovative solutions to make a difference,” noted Yanik Silver, founder of Maverick1000.

It doesn’t take a PhD to realize that the resource needs of this type of work are high. Finding sharks requires the use of boats that can house large research teams, and tagging sharks and installing and maintaining expansive acoustic arrays throughout the country incurs significant costs. Simply put, ocean research and exploration requires a team effort – from project inception to completion.  “There’s an urgent need to explore the ocean and understand it more deeply, and we need a collective approach and partnerships across all sectors—public, private, academic, philanthropic—to raise awareness of the world’s oceans,” explained Mark Dalio, Founder and Creative Director of OceanX Media.

“Entrepreneurial researchers and non-profit organizations will be in the best position to integrate themselves in the exciting conversations that are happening today around oceans,” says Dr. Austin Gallagher, CEO and Chief Scientist of Beneath the Waves.

A member of the Beneath the Waves and Seakeepers collaboration looking on. Seakeepers has been vital in helping BTW’s work.

Private yacht owners and philanthropists are increasingly offering their resources and platforms to ocean science. The International Seakeepers Society functions to link researchers such as Gallagher with yacht owners, to enable research efforts. “Today people are  realizing that environmental research and conservation is one of the most important causes they can give to,” said Tony Gilbert, Program Director of the non-profit Seakeepers. Gilbert has been working closely with NGOs such as Beneath the Waves, commenting: “The team over there has been able to tap into the fact that private individuals are not willing to not only lend a helping hand financially, but also get involved in the field, actually working with sharks up close and personally.”

This type of collaboration goes beyond traditional philanthropy, and is activating creatives, social media influencers, marketing experts, and brands to become part of the ocean conversation.

“I am thrilled to see the power of these partnerships in action,” stated James Sternlicht, advisor to the NGO and Director of Strategic Development for Oceanic Global. “Working with Beneath the Waves & Oceanic Global for the last few years, we can now see how our work in the Exumas, with open sharing of resources between aligned actors, has given us a platform that allows dedicated researchers to not only conduct pioneering research, but to do so with buy-in from the local community and support from government and businesses alike. Such engagement is vital to winning the battles which will ultimately see our oceans thrive or die,” adds Sternlicht.

Beneath the Waves is just one example of an emerging suite of NGOs and research groups on the frontlines of using innovative partnerships to create a better future for not just sharks but the ocean ecosystems they live in. At the core of it all, however, needs to be an authentic, genuine, and scientifically credible team. “It’s truly remarkable what groups like Beneath the Waves can do in such a short time to ensure a sustainable future for sharks and the ocean ecosystem. The strong alignment of interests between the scientific, philanthropic and entrepreneurial communities is a model for others to emulate,” added financial services senior executive Peter deSilva.

Sharks around the world need help. With the next wave of ocean conservation efforts, they just may have the team of allies they need to swim safe for generations to come.