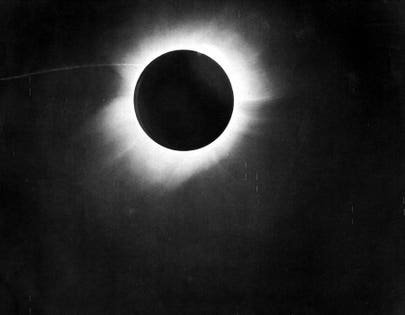 Albert Einstein’s theory of relativity was proved on 29 May 1919 at a total solar eclipse. Credit: F. W. Dyson, A. S. Eddington, and C. Davidson (public domain)

For precisely 100 years, as of today, Albert Einstein has been a proven genius. His incredible general theory of relativity has since been fundamental to our understanding of the nature of reality, specifically of how the cosmos works.

The decisive factor? An ultra-long total solar eclipse, the solar siblings of which still wow eclipse-chasers and solar scientists today.

How was Einstein proved right?

On May 29, 1919, astronomers from Britain traveled to Africa and Brazil to measure the exact position of stars in the Hyades star cluster in the constellation of Taurus. It was part of an ambitious, complicated and controversial attempt to see if, during an eclipse when the sky briefly darkened in the day, the stars appeared to be in the place where Isaac Newton’s long-accepted laws of motion predicted they would be, or whether they were where new-kid-on-the-block Einstein predicted. If the latter, science would have proof that the Sun (and, therefore, all stars and planets) curved space-time.

Until May 29, 1919, Isaac Newton’s law of universal gravity had been regarded as accurate. However, Einstein’s general theory of relativity, published in 1915 during the Great War, predicted that starlight should appear to bend around a massive object, such as out Sun, because it was traveling in a straight line through curved space-time. As the British scientists themselves put it: what effect, if any, is produced by a gravitational field on the path of a ray of light traversing it?

Are you keeping up? Here’s a quick backgrounder:

There is no need to get into equations to understand the basics of Einstein’s general theory of relativity. It says that ‘gravity’ as a natural force does not exist. It’s simply a symptom of the warping of space and time by the presence of massive objects. Light moves through space-time in a straight line, but if space-time is curved by celestial bodies, then the light will appear to be in a different place. “Space-time gets curved by the presence of matter, and light follows a straight line on the surface of space-time because it has no mass,” explains Los Angeles-based astrophysicist and aerospace engineer Dr. Erin Macdonald, who specializes in general relativity, having previously worked in the LIGO Scientific Collaboration searching for gravitational waves. “Therefore if light encounters curved space-time due to the presence of mass it’s going to curve around as well, so could appear to be coming from a direction that it wasn’t originally.”

Luckily, on May 29, 1919, six months after the end of a Great War that had made scientific expeditions near-impossible, a total solar eclipse briefly plunged a narrow path across the planet into darkness for a few minutes. It was a precious opportunity to do astronomy while the Sun was in a darkened sky. The scientists decided to take photos of the Hyades star cluster (those closest to the sun on May 29, 2019) to compare to photos taken of the same star field at night six months earlier. That’s an impossible observation to make unless there happens to be a brief total solar eclipse. “When the sun is not there we know what the stars of Taurus should look like, so they were able to validate that the stars appeared to be somewhere different because the light was getting curved around the Sun,” says Macdonald.

The total eclipse in question was visible from Peru to Mozambique, right across South America, the Atlantic Ocean, and southern Africa. Expeditions were organized. Astronomers were dispatched to various places along the track. Andrew Claude de la Cherois Crommelin and Charles Davidson took photographs from Sobral, Brazil, while Sir Arthur Eddington, the director of the Cambridge Observatory, and his assistant Edwin Cottingham did the same on Príncipe Island in Portuguese São Tomé and Príncipe, just off the coast of Gabon.

They had a lot of time to take their long exposure photos, for this as a once-in-503-years chance. Unlike the “Great American Eclipse” of August 21, 2017, which peaked at two minutes and 40 seconds in Kentucky, totality on May 29, 1919, lasted a whopping six minutes 51 seconds. It was also the longest solar eclipse since May 27, 1416, though on Príncipe totality lasted 5 minutes 12 seconds. In Sobral, it took 5 minutes 15 seconds. That’s really long.

The 1919 eclipse was part of a pattern of eclipses called Saros 136 (a Saros is a family of moon-shadows occurring precisely every 18 years, 11 days), which was responsible for the longest total eclipse of the 21st century, 6 minutes 39 seconds seen on July 22, 2009, in China. Saros 136 is an eclipse-chasers dream, and will next appear on August 2, 2027, when a six minutes 23 seconds totality comes to Egypt. For eclipse-chasers, it’s the epic of our era.

However, there’s a pervasive belief that Eddington’s observations were faked, fudged, or marred by confirmation bias and that the whole thing is merely a romantic science story and not actual science history in the making. And it’s just totally wrong. “Eddington and Einstein were both pacifists. They were both against the war. They both wanted international reconciliation. They both thought that the general theory of relativity was likely to be the right theory,” says Daniel Kennefick, author of the excellent No Shadow of a Doubt: The 1919 Eclipse That Confirmed Einstein’s Theory of Relativity, and physics professor at the University of Arkansas. “Somehow, Eddington has become to be seen as biased, taking decisions which favored Einstein that he shouldn’t have done,” says Kennefick, who traces the myth to an anti-Einstein movement, and also to a mistake by Stephen Hawking in his hugely popular book A Brief History of Time. “It’s hard to stop a good story when it gets going,” says Kennefick.

Kennefick also points out that May 29 is an auspicious date since there are so many stars around the Sun that day. The next total solar eclipse after 1919 to occur on May 29 was in 1938 near Antarctica, and the next one from now is not until 2310. Eclipse-wise, Eddington, and Davidson (and Einstein) got really lucky, but not only did they make the most of their good fortune, but it wasn’t actually their luck at all.

Trouble is, Eddington wasn’t the central figure of the expedition, and nor was Davidson. That was Frank Dyson, director of the Greenwich Observatory in London and Astronomer Royal, who according to Kennefick was pivotal. “The person who had more to do with the decisions was, in fact, Dyson,” he says. “In my book, I wanted to restore him to a more central role in the story because the expedition to Brazil was the one that got the most important data, and it was Dyson who organized it, and analyzed that data.” It was also Dyson who was responsible for planning all eclipse expeditions and was the one who really wanted to test Einstein’s theory in 1919. The whole affair is better described as the Eddington/Dyson expeditions.

How conclusive were the results?

Did Eddington et al fake the results? “They were pretty reliable,” says Kennefick. “There are now people who are skeptical, suspicious that Eddington was biased, but I feel like they’re they’re ignoring Dyson, who was himself skeptical about Einstein’s theory.” It was Dyson who had the most relevant expertise and it was Dyson who made the key decisions, writes Kennefick. “The decision by many astronomers to accept the eclipse results was, in great part, an endorsement of Dyson’s judgment.”

A composite of the August 21, 2017 total solar eclipse showing third contact, the end of totality, with sunlight beginning to reappear and the array of pink prominences along the limb of the Sun.

How precise were the results?

And the accuracy of the photographic plates (which you can see here)? “You will meet modern astronomers who will say that they overstated their case and that they couldn’t have been as accurate as they claimed,” says Kennefick. “The level of precision wasn’t high in 1919, and I don’t see any evidence that it was overstated.” In 1978 a team at the Royal Greenwich Observatory used modern electronic equipment to reduce the data and got precisely the same results that were obtained in 1919, with similar error bars. “Somebody actually took the plates out re-measured everything with modern equipment and concluded that the measurement precision was about where it was claimed to be at the time,” says Kennefick.

“There were some questions about accuracy, but we’ve looked at the data that they gathered since and validated it,” says Macdonald. “The experiment was also repeated three years later in 1922, and they were able to confirm it, so it was a huge win for this new theory of gravity and general relativity,” she says, adding that they weren’t directly detecting space-time. “That didn’t happen until 2015 when we made those detections of gravitational waves, but in 1919 they observed clear indirect evidence that Einstein’s theory of general relativity was correct.”

“If you look at subsequent eclipse expeditions, the accuracy never really improved even as late as the 1970s with much more modern equipment. The accuracy is comparable to the best data from 1919,” says Kennefick. “It’s been checked.”