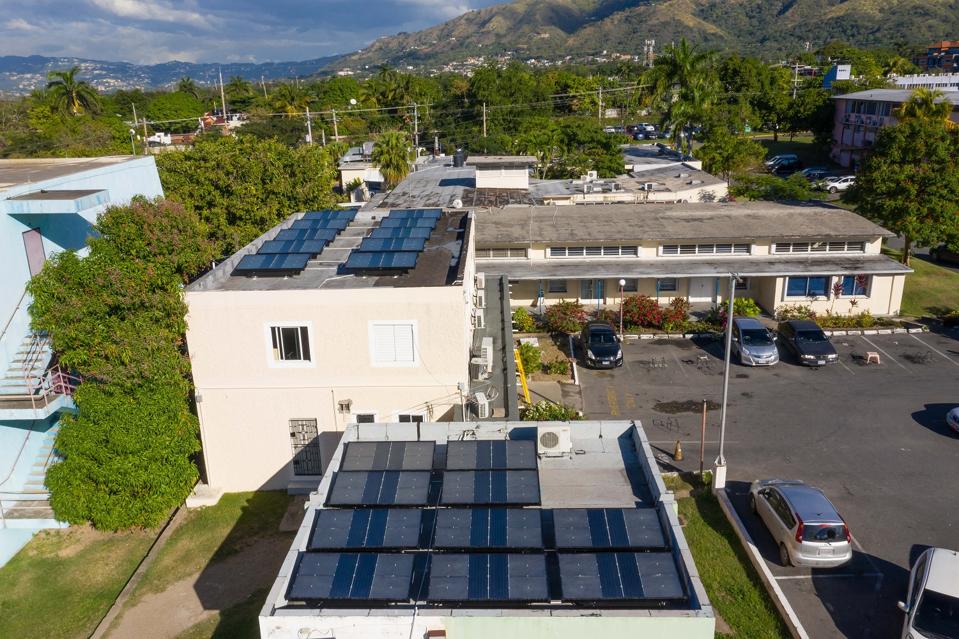 Cody Friesen, associate professor at Arizona State University, has just won this year’s Lemelson-MIT prize for his innovative solar panels that create clean, fresh drinking water from air and humidity. The $500,000 prize “recognizes individuals who translate their ideas into inventions that improve the world in which we live”.

Friesen invented the technology and formed the company Zero Mass Water in Phoenix, Arizona. So far, he has delivered water to populations in more than 30 countries spanning six continents. He is using his prize money to install 200 more panels in Bahia Hondita, Colombia, with the help of Conservation International, which will supply three liters of water per person every day.

In devising the SOURCE Hydropanels, Cody realised that water stress comes in many different forms and customized solutions were needed for each new piece of infrastructure, according to Director of Brand, Kaitlyn Fitzgerald. With a PhD in materials science and engineering, he aimed to create a single solution for all different conditions, including water contamination, drought, distance and pollution, that would democratize water and make it available to regions struggling with water insecurity.

The resulting panels are unique in that they work completely off-grid, using no electricity or infrastructure, and can be used by anyone on the planet, even in the most remote areas. As planned, the technology can make clean water from sunlight and air in many different environments, even in deserts with as low as 5% relative humidity. Each hydropanel is uniquely connected to a global network so the company can monitor and optimize water production from their operations centre. Users can also monitor water levels with an app.

The panels have been criticized by skeptics as being glorified humidifiers. But water-from-air expert and consultant Roland Wahlgren, from Atmoswater Research in Vancouver, Canada, checked it out and says it’s a viable technology.

“Zero Mass Water’s product is a purpose-built dehumidifier,” he explains, “using desiccants to capture water vapor from the air. Solar thermal means are used to release the water from the desiccant so it can be condensed and treated (using ozone) to drinking water quality standards.”

Wahlgren notes the installation relies on SOURCE installers, so there is no do-it-yourself option, and they have to be fixed, so can’t be used on mobile boats or caravans, for instance. But he says the company “appears to have a well-designed, sturdy, reliable water-from-air system. It is modular so various volumes of daily water requirements can be accommodated. Their service levels appear to be quite high to ensure installations are done properly and remain functional for long periods.”

The hydropanels only collect pure water molecules from the air, which are then mineralized with magnesium and calcium to make the water safe for drinking. They have a 15-year lifespan, at which point the company recommends updating certain components to extend their life further. Although the panels can be purchased by businesses and homeowners, Friesen is dedicated to making them available to underserved communities in a water-as-a-service model.

“As inventors, we have a responsibility to ensure our technology serves all of humanity, not simply the elite,” he said in a statement. “At the end of the day, our work is about impact and this recognition propels us forward as we deploy SOURCE Hydropanels to change the human relationship to water across the globe.”

To make the technology available to communities beset by water insecurity, the company builds partnerships around the globe, including the Asian Development Bank, the United States Agency for International Development and the Australian Renewable Energy Agency.

Many powerful stories have arisen from the invention, according to Fitzgerald. For instance, when Hurricane Maria hit Puerto Rico and left 50% of the island with no access to drinking water, Zero Mass Water partnered with NGOs to bring the hydropanels to three firestations in remote areas to restore water access to first responders and their communities.

Through a partnership with the Caribbean Climate Smart Accelerator, they installed hydropanels at the University Hospital of the West Indies Pediatric Ward, providing clean water to the hospital’s youngest patients and their families. The panels produce up to 2,550 liters of water each month, displacing more than 5,000 single-use plastic bottles.

In Byron Bay, Australia, farm-to-table restaurant “Three Blue Ducks” provides water from their own array of panels as part of their commitment to clean, healthy living. With their revenue from selling the water, the restaurant donates hydropanels to rural Australian communities struck by drought. Another recent partnership with sportsperson Patty Mills is bringing a renewable supply of clean drinking water to six indigenous Australian communities. The panels will generate more than 5,000 liters of pure drinking water a month.

Dr Josephine Kulea brought SOURCE Hydropanels to the Samburu Girls Foundation, a rescue center she founded in Kenya, a “second home from home” to help the girls reach university level education. She says the solar panels have been life changing. “It means a lot because it means more time for them to study, and it gives them clean water so they don’t get water-borne diseases. I believe the community has a better future.”

The Lemelson-MIT panel was impressed by Frieson’s drive to help others and provide solutions to pressing global problems.

“Cody’s inventive spirit, fuelled by his strong desire to help improve the lives of people everywhere, is an inspiring role model for future generations,” said Michael Cima, faculty director for the program. “Water scarcity is a prominent global issue which Cody is combating through technology and innovation. We are excited that the use of this award will further elevate his work.”