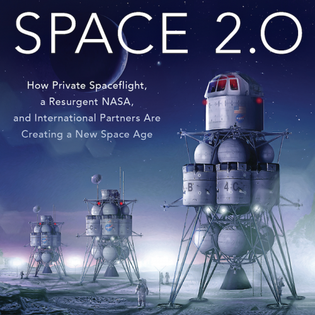 When Elon Musk’s Falcon Heavy rocket made its maiden flight on February 6, 2018, it signaled, for many of us, that the new space age had finally begun. Long anticipated and with more than a few false starts and wrong turns along the way, the promised era of expanded access to space has finally arrived. Rod Pyle’s new book, Space 2.0 is a timely and beautiful celebration of that bold vision.

If I were to distill Space 2.0 into a single phrase, it would be “the gorgeously illustrated handbook of new space.” While the term “new space” has been distorted to the point where it has pretty much the edge definition of a nebula, Pyle prose brings sharp clarity. He identifies the critical topics and makes them accessible to the average reader, without insulting the intelligence of those of us “in the know.” The book is also filled with page after page of great color images, many of them by renowned photographer and space artist James Vaughn.

A future space dweller contemplates the home of her ancestorsJames Vaughan

Pyle opens with the fundamental question, “why space?” This is a query that my regular readers won’t even consider as relevant, but which still bears explanation to the average citizen of planet Earth. He notes that the public investment in space, in particular, requires constant justification and he pulls in all the heavy guns from the space community to get us over this prerequisite hurtle. This is the book that I wish I’d been able to hand out when I served on the NASA agency review team. DC is full of skeptical politicians and budget bureaucrats who fail to see the value in space exploration in general or who refuse to acknowledge the returns we will all garner from embracing the global commercial space revolution. The facts, citations and quotes in Pyle’s book could make converts out of even the most narrow minded of these swamp creatures. Although many of these quotes are technically detailed and represent finely crafted examples of erudition, my favorite has to be this one from the gut of Apollo 14 astronaut Edgar Mitchell:

You develop an instant global consciousness, a people orientation, an intense dissatisfaction with the state of the world, and a compulsion to do something about it. From out there on the moon, international politics looks so petty. You want to grab a politician by the scruff of the neck and drag him a quarter of a million miles out and say, ‘Look at that, you son of a bitch.’

In the decades following the brilliance of Apollo, NASA devoted its human spaceflight efforts to working in low Earth orbit, flying a far too expensive and far too unreliable space shuttle while building a magnificent space station with many international partners. The focus was then on the logistics of flying there without dying and of just resupplying the facility. It was a period of repetition, practice and the development of many important skills and technologies. However, it was not always awe inspiring and at times it was even tragic.The author of Space 2.0 is firmly convinced we will do great things again but that we cannot depend on there being another “Kennedy moment,” with a U.S. President confidently striding up to a podium and announcing an enormous new spaceflight initiative that devours five percent of the federal budget. The old space race was the result of a unique geopolitical and economic moment. He agrees with many of today’s policy makers that the new space age must be driven by the economic benefits of exploiting the space frontier, not just bravado and moxie.

After persuading us that we want to go, Pyle’s book examines and explains the confluence of forces that will allow us to build a new space dream. This begins with cheap access to orbit, a prerequisite for all that must follow. From that new space launch pad, Pyle flies off into the next decade and shows us where we could and where we should be going. Having done that he ticks off each of the milestones that must naturally follow on the path to space development and connects them back to tangible returns for everyone on Earth.

All this hinges on finding the “sweet spot” that balances NASA, the space entrepreneurs, policy makers and the space agencies of our international partners. Each party must contribute its best for this endeavor to play out successfully. This complex interplay is what Space 2.0 diagrams so well. Using dozens of interviews with key people from NASA, ESA, JAXA, Roscosmos, SpaceX, Blue Origin, Virgin Galactic and many other leading space organizations, Pyle illustrates how these forces might combine in the most effective and beneficial way.

Pyle has many important conversations within his book, like the one with billionaire investor Steve Jurvetson, who brokered a major infusion of cash into SpaceX and Planet when it was most needed.  Jurvetson shares a chapter with Chad Anderson of Space Angels, illustrating both the high and low sides of investment into new space. From there, he shows how private investment will drive the commercial side of new space to increasingly greater heights, creating robust infrastructure needed to support dramatically reduce launch costs and increase launch cadence.

Pyle also looks in on the smaller, but no less important firms in this new era, such as Made in Space, which has pioneered the design and use of gravity-independent 3D printers aboard the International Space Station. These sorts of devices may one day become the backbone of space manufacturing supporting the Spacely Sprockets and Cogswell Cogs that will drive the $3 Trillion space economy. He goes on to detail the potential found in constellations of small satellites and other enabling technologies that, while not as sexy as the huge new rockets, are just as critical to making humanity a multi-planet species. It’s a glorious picture of a cislunar (the vicinity of the Earth and Moon) economy, containing systems for in situ resource extraction and storage, orbiting materials and fuel depots, and “space tugs” that will make routine transits to and from the lunar surface.

All of this is supported with excellent color photos, illustrations and charts detailing this bright future of possibilities and benefits. They show us a world where we do not spend tens of thousands of dollars and hundreds of pounds of fuel and oxidizer to loft a single gallon of drinking water into space. In the new space economy, all these commodities are readily available on the Moon, asteroids and Mars in the form of water ice, metallic ores, rare earth elements and more. They will be methodically identified, extracted and processed in space, resulting in a vast savings and ever increasing standards of living for those in space and on Earth. After all, if that dirty extraction and manufacturing can be done elsewhere, Earth can recover from our industrial revolution and support a relatively high population in luxury. Making Earth a better place takes Pyle’s narrative on to planetary defense against rogue asteroids and the concept making humans “disaster proof” by becoming a multi-planetary species.

There are no bigger questions than these and Pyle has the space chops to take them on, having written an entire library on space. If you doubt that, just read the forward, written by moon explorer and Mars advocate, Buzz Aldrin. One should never argue with Buzz and the book is produced in association with the National Space Society, a group Buzz has long supported. Buzz and Pyle encourage you to join the NSS and meet many of the space luminaries featured in Space 2.0 at International Space Development Conference , an event I’m very proud to be chairing this year in Arlington Virginia on June 5-9.