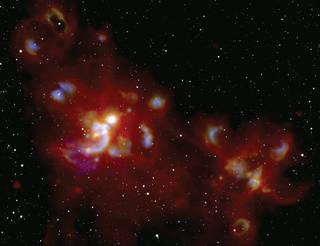 Researchers at SOFIA, the Stratospheric Observatory for Infrared Astronomy, have used the Faint Object infrared Camera (FORCAST) to study a giant celestial cloud called W51 . Celestial clouds are birth places for stars and are formed after a huge cosmic explosion known as a supernova. Supernovae are the largest explosions in space and the most recent supernova observed happened about 100 years ago. Changes in the core of a star lead to these explosions and can either happen when a massive star runs out of fuel or from a binary star system. Supernovae shoot lots of different elements into space, helping form planets and other stars. This is where the phrase we are all made of star dust comes from.

W51 is located about 17,000 light years away – that is, the distance travelled by light in 17,000 years. Just imagine that. This cosmic cloud contains the ingredients needed to make new stars. In particular, these researchers were interested in finding out more about how massive stars are made. Massive stars make up less than one percent of all stars in our Universe. Our sun is not a massive star, and since stars like our Sun are so common in our Universe they are pretty well understood. However, how massive stars are formed are still quite a mystery since there are so few massive stars in our cosmos. Places like W51 are places where massive stars are made and they are invisible to our eyes. The light emitted from areas like W51 are not in the visible range and so scientists need instruments to not only see that far but also detect the non-visible light to form a picture. That’s where FORCAST comes in.

FORCAST is an infrared camera that has a zoom that is large enough and sensitive enough to see these giant celestial clouds. By analysing the massive stars in the Milky Way, scientists can extrapolate their findings to find out how massive stars are made outside of our galaxy. FORCAST offers the best resolution images for this wavelength and so can reveal features that were previously hidden.

A quick fun fact for you, SOFIA is a Boeing 747SP jetliner that carries FORCAST which is 106 inches in diameter. From the data retrieved from SOFIA as well as data from Herschel Space Observatory and NASA’s Spitzer Space Telescope, researchers found out that one of the stars was really, really, large. The equivalent of 100 Suns in mass. More data, however, will allow the scientists to confirm this large mass.