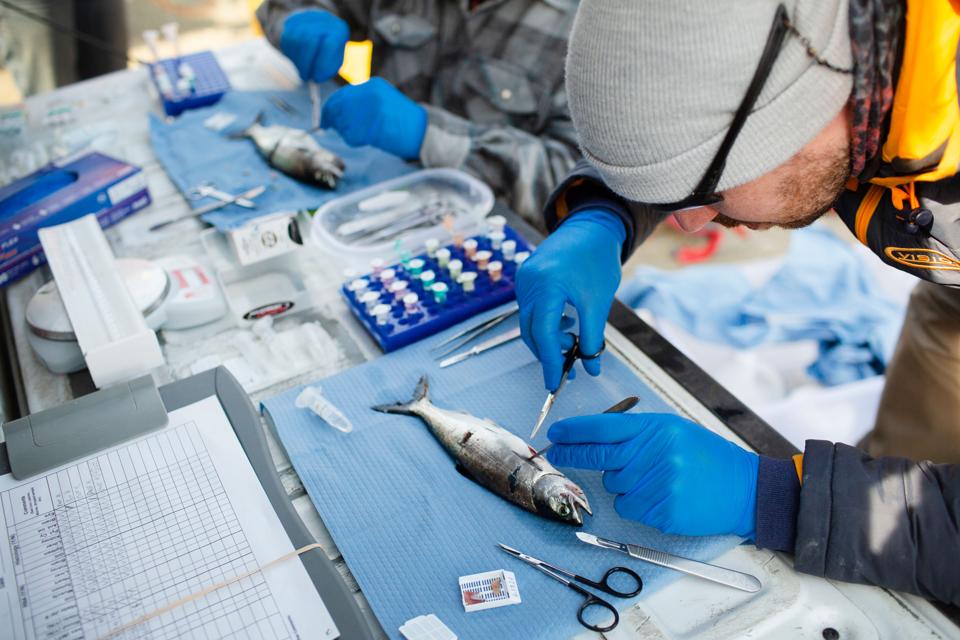 Scientists from the University of British Columbia, Fisheries and Ocean Canada, and the Pacific Salmon Foundation have discovered three new viruses that infect endangered Chinook and sockeye salmon – including one that was previously thought to only infect mammals.

These fish are considered to be ‘keystone species’ – meaning they have a disproportionately large impact on their ecosystem, making them a high priority for conservation. However, populations of both Chinook and sockeye salmon have been declining in the Pacific Northwest for the last three decades despite increased fishing regulations.

Researchers believe viruses may be part of the cause of the salmon declines. To date, most research on salmon-infecting viruses has focused on the piscine orthoreovirus, or PRV. PRV can cause ‘Heart and Skeletal Muscle Inflammation Disease’ (HSMI) in Atlantic salmon, devastating farmed stocks. However, PRV does not have the same disease-causing effect on Chinook and sockeye salmon.

Suspecting there may be other disease-causing viruses impacting North Pacific salmon populations, researchers went searching for new potential pathogens. First, they tested dead and dying farmed salmon for symptoms of a viral infection by screening for biomarkers typically produced by an infection. Through further analysis of virally-infected salmon, researchers discovered three new pathogens.

All three viruses discovered are related to viruses known to cause serious disease in other animals, but one was particularly unexpected to researchers. “We were surprised to find viruses which had never before been shown to infect fish,” says Dr. Gideon Mordecai, researcher at UBC’s department of earth, ocean and atmospheric sciences. “Although there’s no risk to humans, one of the viruses is evolutionarily related to respiratory coronaviruses, and is localized to the gills. That suggests it has a similar infection strategy to its distant relatives that infect mammals.”

The researchers took their discovery a step further and searched for the three viruses in healthy farmed salmon, hatchery salmon, and wild salmon populations to determine the geographic distribution of the viruses and their potential threat to Chinook and sockeye salmon populations.

As Dr. Mordecai explains, “One of the viruses was relatively common in juvenile migratory salmon as they enter the ocean—a period thought to be critical to their survival into adulthood.” Meanwhile, another virus was only found in farmed Chinook salmon. The third was localized to Chinook salmon coming from freshwater hatcheries, where it was found in over 15% of all hatchery Chinook tested, but was barely detectable just a month after the salmon entered the ocean.

These results suggest an important relationship between viruses and salmon mortality. “[This discovery] emphasizes the potential role that viral disease may play in the population dynamics of wild fish stocks, and the threat that these viruses may pose to aquaculture,” says UBC virologist Dr. Curtis Suttle. “It’s essential that we determine whether these viruses are important factors in the decline of Chinook and sockeye salmon stocks.”