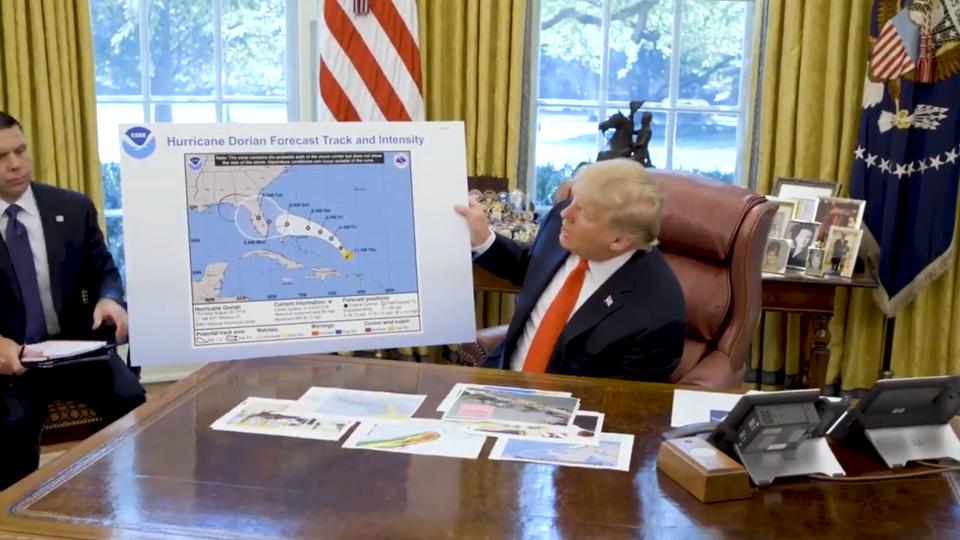 President Trump displayed an outdated and falsely altered National Hurricane Center forecast map on Wednesday during a public briefing on Hurricane Dorian’s threat to the Carolinas over the next two days.

The map, showing a six-day-old forecast, was altered with a black marker to make it appear that the agency’s official forecast included parts of Alabama, Georgia, and Florida that were not included in the actual forecast. The alteration was an apparent attempt to bolster the president’s incorrect assertion last weekend that Alabama could feel the effects of the hurricane as it moved up the southeast coast.

The map the president displayed in the Oval Office shows the National Hurricane Center’s forecast for Hurricane Dorian at 11:00 AM EDT on Thursday, August 29, a long-outdated forecast that doesn’t reflect the threat posed to the southeastern coast this week.

The marker-assisted alteration to the map extended the forecast’s cone of uncertainty to include the Florida Panhandle and the southern corners of Alabama and Georgia. The cone of uncertainty is the margin of error in a hurricane’s forecast track, meant to show where the center of the storm could wind up based on previous errors in track forecasts.

President Trump talked to reporters about the current forecast while holding up the map, telling news cameras: “But that was the original chart. And you see it was going to hit not only Florida but Georgia. It could’ve, it was going toward the Gulf. That was what we, what was originally projected. And it took a right turn.”

Hurricane warnings are in effect for coastal sections of South Carolina and North Carolina ahead of Hurricane Dorian’s expected close brush with the coast on Thursday and Friday. Despite the risk to these two southeastern states in the coming days, the president only tangentially mentioned the threat to the Carolinas in the video posted to the White House’s official Twitter account.

The president tweeted on Sunday, September 1, that Alabama was one of the states that would “most likely be hit (much) harder than anticipated” due to forecasts changing to reflect the hurricane’s eventual stall over The Bahamas and its curve toward the north.

The National Weather Service office in Birmingham had to reassure its residents that Alabama would see no impacts from the hurricane:

Alabama was never in the National Hurricane Center’s cone of uncertainty at any point during Hurricane Dorian’s track toward the United States over the last week. No official forecast showed the core of the hurricane coming close to any part of the state. The president didn’t take kindly to reporters pointing out the disconnect between his statements and the official forecast, falsely insisting on Twitter the following day that he was right about the hurricane threatening Alabama.