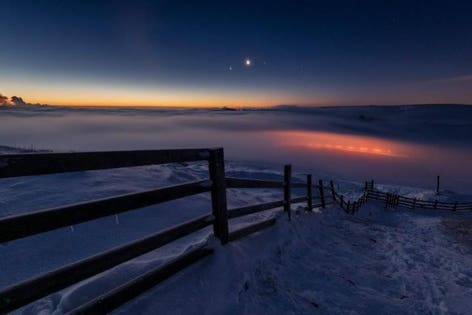 Jupiter, Venus and the moon lined up in the early morning sky in a phenomenon known as a conjunction. Derbyshire, Peak District. UKGetty

If there are clear skies where you are, this close ‘kiss’ promises to be an arresting sight.

That’s particularly true from North America, which has the very best view of what astronomers call a conjunction. While elsewhere in the world the Moon and Jupiter will not appear to be particularly close during the hours of darkness, observers in North America will be able to witness the crescent Moon appearing right beside Jupiter.

Tokyo, Japan-February 2, 2019: (from left) Saturn, the Moon, Venus, Jupiter and Scorpio at daybreakGetty

When to see a crescent Moon and Jupiter

Get up at 05:00 a.m. Seriously. Yes, it’s early, but since sunrise occurs at around 06:30 a.m. across the U.S. it’s important to look around an hour before the Sun’s impending appearance drastically brightens the sky. The Moon and Jupiter actually rise together close to 02:00 a.m. so if you’re a really early riser you can observe the conjunction then.

How to see a crescent Moon and Jupiter

You need a clear view to the southeastern sky, and the higher-up you are, the easier it will be to see. A room upstairs room with an east or south-facing window shold be fine.

The Moon will be 40% -lit. It’s a 23-day old Moon, so it’s gradually waning to a crescent. You may be able to see ‘Earthshine’ on the dark part of the Moon. That’s sunlight being reflected from Earth’s day-side back onto the Moon.

Will there be other planets?

Yes. If you look to the lower-left of the Moon and Jupiter, you will see the ringed planet Saturn (always worth putting a small telescope on to glimpse its rings) and, closer to the horizon, the incredibly bright planet Venus.

It’s worth putting a small telescope – or any pair of binoculars – on Jupiter to see its four biggest moons.Getty

How to see the moons of Jupiter

Put any pair of binoculars on Jupiter and, incredibly, you will see some of its biggest moons, the so-called Galilean Moons (because they were first discovered by Galileo Galilei using the first-ever telescope, in 1610). The moons Callisto, Europa, Ganymede and Io can be seen in a diagonal line around Jupiter.