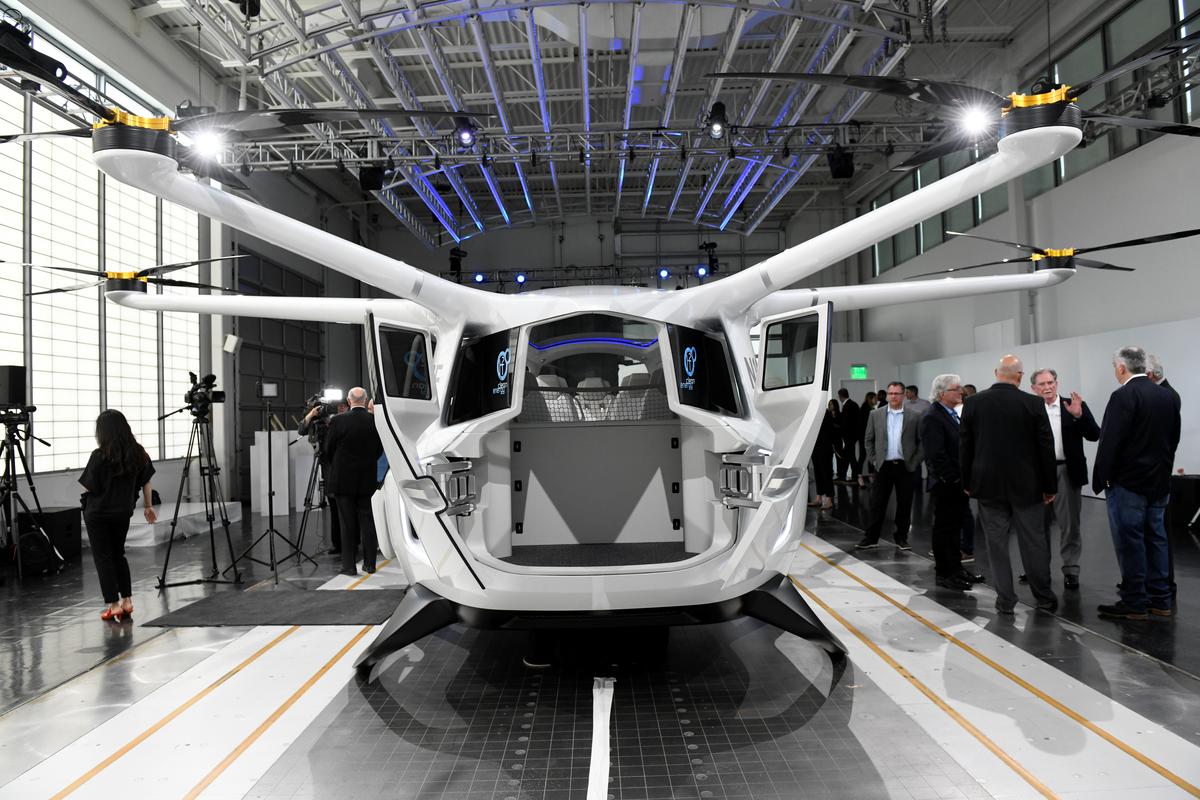 LOS ANGELES (Reuters) – Developers of a multi-rotor hover craft billed as the first flying vehicle to be powered by hydrogen fuel cells unveiled a full-scale model on Wednesday in Southern California, in a show-and-tell that raised some eyebrows but never left the ground.

Alaka’i Technologies unveils a model of a working prototype of Skai, a hydrogen fuel cell powered multi-rotor aircraft the company designed to carry up to five passengers, during an event in Newbury Park, California, U.S., May 29, 2019. REUTERS/Andrew Cullen

A mockup of the futuristic aircraft, dubbed “Skai” by its inventors, was put on exhibit for investors, the news media and other invited guests outside the BMW Group’s Designworks studio in Newbury Park, a suburb north of Los Angeles.

Engineering and avionics for the drone-like vehicle were developed by Alaka’i Technologies, a privately held company based in Massachusetts but named for a tropical forest in Hawaii ranked as one of the wettest spots on Earth. The BMW unit contributed to the craft’s design.

The company touts the Skai craft as a promising new zero-emissions mode of personal airborne transport ideal for Southern California, a region long plagued by smog and renowned for traffic gridlock of epic proportions.

The mock-up displayed on Wednesday, about the size of a minivan, resembles a sleek, five-seat SUV with landing skids and an array of six horizontal rotors attached at the end of arms protruding from the roof of the craft. It was all for looks.

The display model is a replica of the company’s only full-size operational prototype, which is expected to begin remote-controlled test flights soon at the firm’s Massachusetts lab, said Chief Executive Officer Steve Hanvey.

“We’re going to get off the ground imminently,” he told Reuters, adding that assembly was completed weeks ago and that initial Federal Aviation Administration certification is pending.

He said the relative simplicity of the aircraft and its operation compared with conventional helicopters should ease the FAA approval process as development progresses from experimental to commercial production.

Hanvey said he expects to win FAA certification for initial production vehicles by the end of next year, and to make its first aircraft available for sale in early 2021, before ramping up production.

In the long run, the company foresees producing more than 10,000 vehicles a year, with a sticker cost that would “approach the price of a luxury car,” Hanvey said. They will be built in three basic configurations – for taxi or personal passenger flights, for emergency medical transport and for cargo delivery.

Powered by six hydrogen fuel cell batteries – one for each rotor engine – the aircraft are designed for a range of 300 miles but are envisioned mainly for short urban hops or flights between nearby cities.

For safety, they will be equipped with a redundant autopilot system, a propulsion design that can fly with the loss of at least one motor, and a parachute attached to the vehicle’s airframe.

Although FAA rules will require pilot operation, developers expect the vehicles ultimately will be flown autonomously by pre-programmed guidance systems.