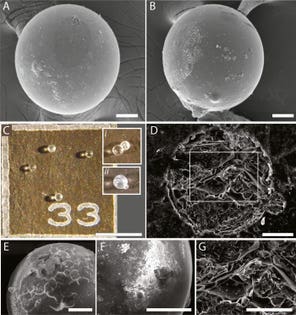 In 2006, studying sediment trapped inside fossil clams recovered from fossil beds exposed in a quarry in Sarasota County, Florida, Mike Meyer, at the time undergraduate student at the University of South Florida, discovered something unusual. Apart from the carbonaceous shells of microfossils and sand grains, the sieved sediment also contained tiny translucent spherules. They lacked any internal structure, but broken microspherules showed a conchoidal fracture, suggesting a microcrystalline structure or possibly a non-crystalline solid like glass. Despite contacting experts, Meyer was not able to identify the origin of the microspherules and for more than a decade he just kept them in a small box at home.

Taking advantage of some free time in the lab and now an assistant professor of Earth systems science at Harrisburg University in Pennsylvania, Meyer analyzed the chemical properties of the spherules. Initial results showed traces of exotic elements. Using the potassium-argon ratio of the analyzed microspherules, it was possible to date their formation around 2 to 3 million years ago. Meyer then compared the chemical composition of the spherules to glass beads formed by volcanic eruptions, natural glass formed during meteorite impacts and industrial slag. His findings suggest that the spherules are indeed microtektites, formed by a meteorite impact potentially on or near the Florida Platform. Unusual for impact debris the microspherules contain high amounts of sodium. Meyer et al. suggest in the published research that the sodium is evidence that the impact happened in the sea. As the impact vaporized large amounts of salty (sodium-chloride rich) seawater, sodium was released and mixed with melted sediments of the seafloor.