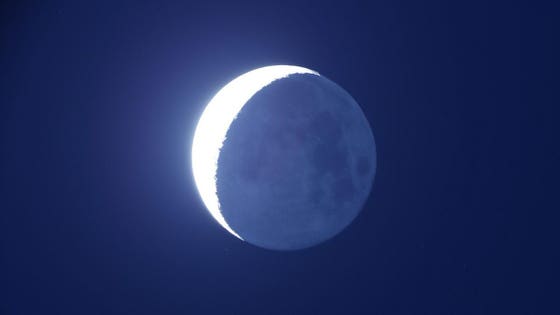 In the last and first few days of a Moon it’s possible to see ‘Earthshine’.Jamie Carter

Did you see the Super Snow Moon? If you did, it’s likely that you were slightly dissapointed. After all, it was just a regular full Moon (albeit a slightly larger one) with a hyped-up name.

Just don’t give up on the Moon because this week it’s going to look so much more worthy of going outside and taking a look.

There is no name for the sight available to early rising moon-gazers on Friday and Saturday this week, but I guaranetee you that it will be stunningly beautiful.

On Thursday morning about an hour before sunrise, a crescent Moon will be visible in the southeastern sky. However, it’s what’s around it that makes it extra-special. Although it’s closest to the ringed planet Saturn to its left, look below-left and you will see the super-bright planet Venus. It’s so bright, it’s often called the Morning Star when it’s visible before sunrise. Look further away to the top-right, and there’s Jupiter.

How to photograph Venus and the crescent Moon

The folllowing morning, on Friday, an even smaller, more delicate-looking crescent Moon will have orbited Earth a little more, and will now be visible in the southeastern morning sky betwen Saturn and Venus, though closer to Venus.

Since the moon and Venus will be just 4.3° apart, it will make for a great photo.

Saturday morning also offers a chance to get Venus and an even slimmer crescent Moon just 7° apart in a photo, though our satellite will by then be closer to the horizon and could be more difficult to see.

How to see Earthshine on the Moon

These confjunctions between planets and the Moon are significant events in themselves for moon-gazers, but what really adds beauty is Earthshine. Look at the lit-up crescent Moon, then look slightly to the left at the darker part of the Moon. You should be able to see some detail on the Moon. That’s dunlight being reflected from Earth and on to the Moon. It’s always happening, but only visible to the human eye when only a slither of the Moon itself is lbieng lit by the Sun.

The Moon is at incredible sight if you know when to look at it.Jamie Carter

Why is the crescent Moon so slim?

New Moon is coming up, which means that our satelite is waning, its lit-up part getting smaller and slimmer each day. Now in is third quarter phase, the moon will wane until is becomes inviisble on March 6, when it will be roughly between Earth and the Sun.

Make the most of this planetary display, with the added bonus of a waning crescent Moon, because Venus is now traveling back towards the Sun, and won’t be visible for long.

When is the Super Worm Moon?

The third and final supermoon of 2019, the Super Worm Moon, occurs on March 20, peaking just a few hours after the Spring or Vernal Equinox.