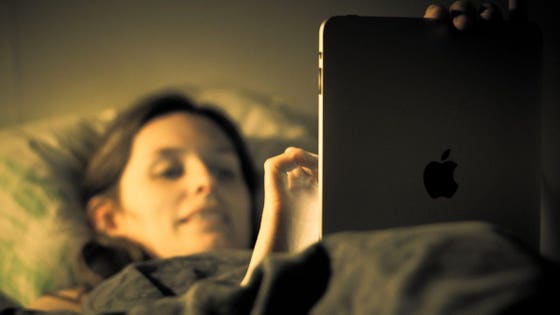 How does artificial light affect our biology? According to new research, humans are more sensitive than previously thought: even a little light in the evening can have a large effect on your body clock.

Our internal clocks follow the human circadian cycle (from circa diem, Latin for ‘around a day’), which is just over 24 hours long and can be reset by external cues such as sunlight. The clock affects our physiology and behavior, and controls circadian rhythms: levels of the sleep hormone ‘melatonin‘ rise at night and fall during the day, for instance, influencing whether we feel sleepy.

Light is detected by ‘intrinsically photosensitive retinal ganglion cells‘ — special neurones in retina of the eye that are connected to a cluster of nerve cells called the SCN (suprachiasmatic nucleus) in the hypothalamus of the brain. When it’s dark, the retinal ganglion cells contact the SCN, which then tells the nearby ‘pineal gland’ to release melatonin into the bloodstream — broadcasting a signal throughout the body that it’s time to sleep. The SCN is the body’s ‘master clock’, synchronized by light, and can be thrown out of sync by artificial illumination created by indoor lighting at night.

The new study by scientists at Monash University in Australia has now revealed how exposure to evening light disrupts circadian rhythms. After putting 55 young people in less than 1 lux (about the amount seen at dusk), the researchers exposed participants to a range from 10 lux (twilight) to 2000 lux (daylight). They found that melatonin levels were suppressed by half — making people more awake — at 25 lux, or roughly equivalent to the amount of indoor lighting used at night, which delayed an increase in melatonin by about 1 hour.

Their results also showed the differences in sensitivity among individuals: one person experienced 50% melatonin suppression at just 6 lux, whereas the least-sensitive participant didn’t feel the effects until exposure to 350 lux. This suggests that sensitivity to light doesn’t have the same impact on everyone’s body clocks, which can in turn affect our health.

Obesity and being overweight is linked with sleep deprivation, for example, and another recent study found that even short-term exposure to dim light at night causes neurological changes and symptoms similar to depression. Taken together, the science highlights how staying awake can be bad for our bodies.