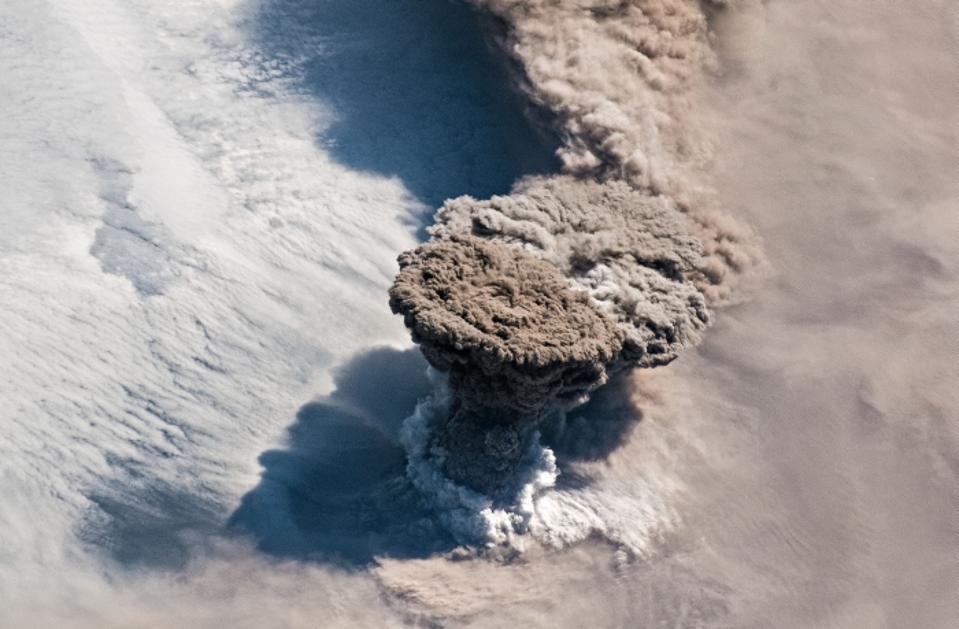 According to researchers at the University of Colorado, Boulder, colorful sunrises and sunsets observed and photographed in North America and Europe in July-August 2019, were caused by volcanic fallout from the Russian volcano Raikoke. Raikoke is located on the Kuril Island chain of the Kamchatka Peninsula, part of the subduction zone where the Pacific plate slides beneath the continental crust of the Asian continent.

The volcano erupted June 22, after 96 years of inactivity, sending at first a cloud of volcanic ash and sulfuric compounds two kilometers (1.2 miles) into the sky. According to NASA’s Earth Observatory, the volcanic plume of subsequent eruptions did rise well into the stratosphere, about 11 to 13 kilometers (6 to 8 miles) high.

The eruption of Raikoke sent large quantities of volcanic dust and sulfur-dioxide gas into the stratosphere, where the sulfur-dioxide reacted with water vapor forming tiny droplets of sulfuric acid. As there is no rain in earth’s stratosphere, the aerosol droplets were not washed out, but were dispersed by atmospheric currents all over the northern hemisphere.

The team from the California University’s Laboratory for Atmospheric and Space Physics managed to find traces of volcanic aerosols, likely from the Raikoke eruption, in air samples collected near Laramie, Wyoming, in August 2019, coinciding with colorful sunsets observed in Colorado. Based on the group’s preliminary data, which it will publish later this year, some aerosol layers in the stratosphere were 20 times thicker than normal in the wake of the eruption. Based on observations made after volcanic eruptions in the past, we know that small volcanic particles in earth’s atmosphere scatter the sunlight, especially during sunset and sunrise, when the sun’s rays have to travel a greater distance to reach the observer.

It is likely, so the researchers, that especially the pink to vivid yellow sunsets observed in July and August 2019 in North America and Europe, were the results of the sun’s rays scattered in the stratosphere by the aerosols of the Raikoke eruption.