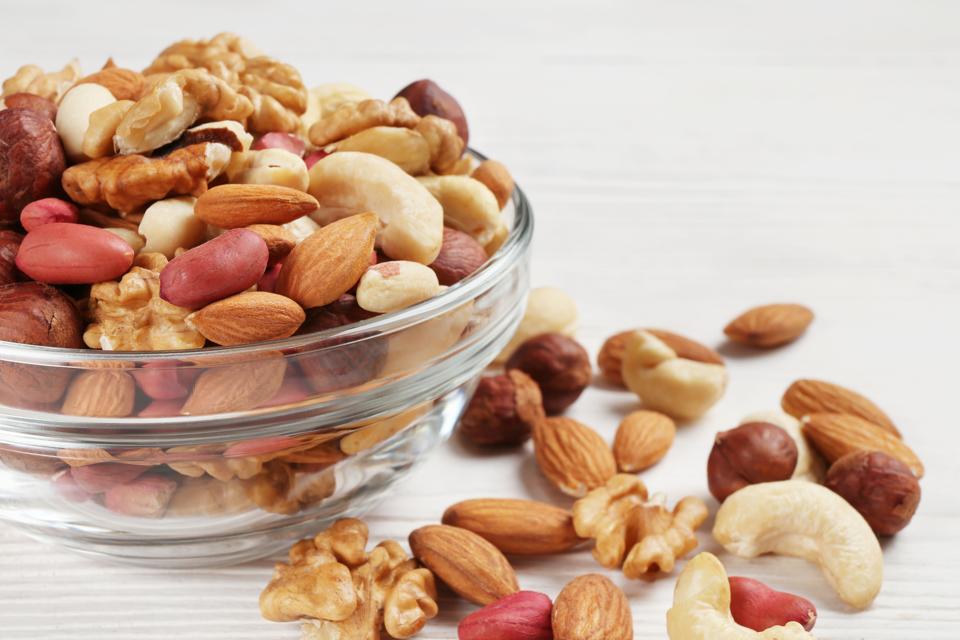 Can adding nuts to a typical diet really improve sexual function and performance? A new study suggests that it’s possible, and it’s not the first, but what does the science on this subject really tell us?

What the latest study found

The latest study started with a group of 83 healthy men between the ages of 18-35. For 14 weeks, half of the group ate a typical “western-style diet” (high fat, lots of processed foods) without nuts, while the other group ate the same diet supplemented daily with a 60-gram mixture of walnuts, hazelnuts and almonds.

Participants answered a questionnaire at the start and end of the study designed to assess their sexual function (including strength of libido and quality of orgasm), and their peripheral blood levels of nitric oxide (NO) and E-selectin were measured. Both chemicals are reliable markers of “erectile endothelial function,” which affects the quality of blood flow resulting in an erection.

The results showed that compared to the no-nuts control group, the nuts group self-reported a “significant increase in orgasmic function and sexual desire.” The blood tests, however, didn’t reveal a difference in NO or E-selectin levels between the groups. Quoting from the study: “In the present study, none of the possible mechanisms explored (NO and E-selectin as surrogated markers of endothelial function) seem to explain the beneficial effects observed on orgasmic function and sexual desire.”

So the results suggest that the men eating nuts felt like they were getting a sexual performance boost, but the big chemical changes the researchers would expect to accompany those results didn’t materialize. The perception of sex-function improvement was high, but chemical evidence was nil.

As with all research like this, it’s important to know where the funding is coming from. In this case, it’s an industry association called the International Nut and Dried Fruit Council (INC) that represents 800 nut and dried fruit companies in more than 75 countries, according to its website.

Simply because an industry group funds a study doesn’t automatically invalidate the results (although the connection increases scrutiny), and as mentioned these results don’t support a strong conclusion that adding nuts to a typical diet will improve sexual function. Rather, the outcome looks more like a placebo effect – and yes that’s still an effect, but not one supported by tangible evidence.

What has previous research found?

Even though the latest study doesn’t provide strong evidence, the science does generally point to at least something going on.

The same researchers who conducted this study also published one last year showing that daily nut consumption increased “sperm count and vitality, total motility, progressive motility and morphology of sperm” compared to a control group. That’s a different sort of outcome, but it does point to a measurable change in male sexual function.

A smaller study found that adding 100 grams of pistachios to a typical diet over 12 months improved erectile function in men with a history of erectile dysfunction.

A few other studies have found similar results, but most studies suggesting that nuts can improve sexual function have focused on the Mediterranean diet. This variety of research has found benefits for women and men, and often the results cover more ground than just sexual function, including factors like cholesterol, triglycerides, and diabetes risk.

Another study found that women with Type 2 diabetes who followed the Mediterranean diet showed “lower prevalence of Female Sexual Dysfunction (FSD).” And another found a link between following the diet and improved sexual function among women with metabolic syndrome. A clinical trial focused on people newly diagnosed with Type 2 diabetes found a link between the Mediterranean diet and improved sexual function for both sexes.

A long list of research on the Mediterranean diet and sexual function has found outcomes like those, but since the diet includes several other things along with nuts (fish, vegetables, fruits, olive oil, etc.), it’s impossible to say that nuts are causing the outcomes. More likely, nuts as part of a combination of blood flow-enhancing foods are doing the job.

Plus, following the Mediterranean diet can also significantly lower body weight. Obesity is one of the main causes of sexual dysfunction in women and men, so it makes sense that the diet would deliver benefits from that angle as well.

Takeaways from the science

The latest study doesn’t offer strong evidence that eating more nuts along with a typical unhealthy western diet will lead to sexual function improvements (beyond self-reporting of benefits by the participants).

The larger body of research points to a link worth acknowledging – but the link is by far the strongest in the context of bigger dietary changes than simply eating more nuts.

The strongest conclusion offered by the science to-date is that eating more nuts as part of the Mediterranean diet may deliver several benefits all orbiting around improved cardiovascular health, sexual function and performance among them.

The latest study was published in the journal nutrients.