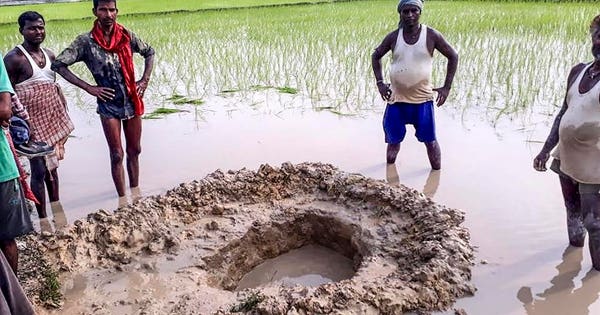 Villagers and farmers pose around the crater of a suspected meteorite that apparently crashed in a field at Mahadeva village in the Indian state of Bihar.

Rather excitingly, it appears that a visitor from space just slammed (harmlessly) into a rice field in India’s Bihar state sometime on Monday. According to various media reports, including the Guardian, locals recovered a smouldering rock from the field, some of whom saw it fly down from the sky, apparently burning up as it did so.

Almost unquestionably, this was a meteorite impact. So, in case you’re wondering, here’s everything we know about the event, from the meteorite’s potential type(s) to how it fits in with all the other debris that rains down from space all the time. If I get any more information over the next day or two, I’ll update the article accordingly.

So, what just crashed into India?

Unless this is a rather elaborate and pointless prank, this appears to be a meteorite impact. Various reports suggest that the original meteor, at least the meteor just before impact, excavated a hole around 150 centimetres (around five-foot) deep. The object that was recovered from the impact site, a rice paddy in a village named Mahadeva, weighs about 15 kilograms (33 pounds), and is about the size of a football.

Do we definitely know it’s a meteorite?

It’s unlikely to be anything else. Photographs taken from the scene show no sign of any artificial debris, like that from a rocket booster or a de-orbited satellite, and people at the scene are holding up a slightly odd-looking rock of some sort.

CNN reports that the rock is currently on show at the Bihar Museum, and photographs shared on Twitter by the state’s Chief Minister, Nitish Kumar, shows it in clear, slightly cleaned up detail. Although it certainly appears to be a meteorite, it hasn’t yet been confirmed; fortunately, that’ll be cleared up when it gets taken to the state’s Srikrishna Science Center, where experts will probe and poke it to make sure it’s the real deal.

This is a bit of a guess, but by the looks of it, the rock has these thumbprint-like scars on its surface. These could possibly be regmaglypts, which are carved out as the original meteor enters the atmosphere, heats up, and begins to shed material in chunks from its surface.

Wait – what’s the definition of a meteorite again?

If a space-tumbling rock makes it through the atmosphere but disintegrates before hitting the surface – perhaps explosively fragmenting as the building air pressure proves too much for it to handle – then it’s known as a meteor. If this atmospheric heating causes it to considerably light up as it tumbles through the sky, self-destruct or no, it’s technically known as a fireball; if it does explode, it’s called a bolide.

If it hits the ground? Yep, that’s a meteorite.

What type of meteorite is it?

Although nothing can be said for sure at present, its appearance and the fact that it’s magnetic to a degree suggests that it’s not a Martian or a lunar meteorite, as they contain few metals, not least magnetic ones. Most other meteorites, from the stony ones to the iron ones, to the hybrids in-between, contain some iron-nickel metal – especially the iron ones, obviously. So it’s probably one of these many, many varieties, but it’s hard to say what for now. There’s just not enough information to say.

Farmers in India say they spotted a roughly 33-pound possible meteorite in a muddy crater, claiming it was still warm when found: https://t.co/RjhriSsHsr pic.twitter.com/DjYcZ4Z2st

Is this impact rare, in any way?

That depends on what you compare it to. As this amusingly brusque soliloquy and FAQ by a meteorite expert notes, most things that fall from the sky are not meteorites. That doesn’t mean that space stuff doesn’t shower down onto Earth all the time, because it does: around 193 tonnes (213 tons) of it each day, according to one estimate. Thanks to our atmosphere, though, the vast majority of this material is too small to survive the entrance, and it burns up and disappears into nothing bigger than dust particles.

The larger the rock, the more likely it’ll make through our atmosphere (although that depends on the angle it hits the atmosphere, the meteor’s composition and its initial structural integrity). Larger rocks are rarer than smaller ones, so it’s far less likely on any given day a larger rock is going to turn into a meteorite.

Sometimes, though, they succeed: every few months, it seems like people somewhere on Earth see what is likely to be a fireball. Even if no-one sees it, they unleash plenty of energy as they enter the atmosphere, burst up in the air, or explode upon impact, which means that scientific instrumentation, from seismometers and lightning detectors to infrasound detectors and weather satellites can spot them in a variety of ways. (Sometimes, they’re large enough to leave giant craters, and the biggest are famously able to wipe out plenty of life. With that in mind, it’s always nice to know that space agencies are working on ways to spot the potentially hazardous ones long before they reach Earth.)

Meteorites themselves, though, are rarely found. It’s tricky to work out where they might have landed if no-one was nearby to see or hear the impact, for one thing, even if the trajectory of the incoming fireball can be extrapolated groundward. And, despite the fact that the planet is full of people, most of it isn’t covered by humans, but by wild terrain and, crucially, oceans. Most meteorites will never be found by humanity, whether or not we spot any fireballs prior to impact.

Every now and then, though, they are – either by unsuspecting people, who see an impact (which is what appears to have happened in this latest case) or simply find a curious rock that happens to be the real deal, or by scientists who know where to look.

Meteorites of all kinds fall through the atmosphere at roughly equal rates all over the planet, but you’re more likely to find them in deserts – both the sandy, dry type or the icy type, like Antarctica’s. This is largely because the dark or shiny hues of these meteorites stand out against the stark landscapes; at the same time, scientists cognizant of the conveyer belt-like nature of some of the ice means that they know that meteorites tend to clump together in certain locations.

That still doesn’t mean they’re easy to find. Due to a strange quick of physics, iron meteorites are probably hiding out beneath the ice’s surface layer in Antarctica, and scientists are currently trying to hunt them down. This December, we’ll likely find out if they have succeeded or not – but that’s another story for another time.