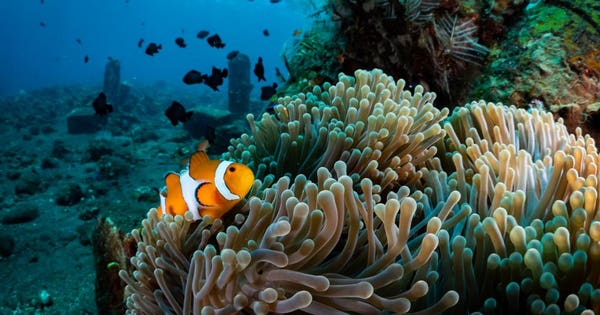 After hatching from fertilized eggs, clownfish larvae are ready to feast. Smaller, slower, and visually quite unlike the juvenile and adult clownfish from Finding Nemo, these larval clownfish have many challenges to overcome to grow up into adult anemone-dwelling clownfish.

To achieve a hearty diet, larval clownfish mostly feed on copepods (relatives of crabs and lobsters), often referred to as ‘zooplankton’. Although abundant, copepods are not easy to capture – especially for recently hatched larval fish. Adults and juvenile clownfish adopt an ‘S-shape’ to strike their copepod snacks, but what about the younger larvae?

Scientists at Pacific Bioscience Research Center in Honolulu, Hawaii recently discovered larval clownfish have a different strategy: Instead of S-curling, they use a ‘J-shaped’ position for their attacks.

A newly-hatched clownfish (Amphiprion ocellaris) larva J-curling to strike at a copepod.

The larval ‘J-shaped’ attack sets clownfish apart from many other fish, including anchovy and zebrafish, which use the ‘S-shaped’ attack in all life stages - as larvae, juveniles, and adults.

To study this behavior, researchers recorded the feeding behaviors of newly-hatched clownfish, divided into groups by age 1-5, 6-9, and 11-14 days old. Larval clownfish metamorphose into juveniles after about two weeks, where they begin to resemble their orange clownfish parents and adopt the S-shaped predatory strike behavior. The researchers also provided the larval fish with three menu options – different sized copepods – to see if the larval clownfish change their hunting behavior depending on the size of their prey.

Perhaps unsurprisingly, the larval clownfish transitioned from only consuming the two smallest copepods, known as nauplii and copepodites, as newly-hatched larvae to eating the largest copepods as late-stage juveniles. Nevertheless, the J-curl attack persisted in all larvae even as their food preferences matured, although the strike became more of an ‘L-shaped’ attack for older larvae.

Researchers have some ideas for why feeding behavior may change as clownfish grow up. ‘The combination of the [larval] clownfish’s extreme J-shaped posture and alternate sculling of its pectoral fins likely minimizes disturbance during its predatory approach while precisely aligning it with the prey’, says Lilian Tuttle, one of the authors of this study. In other words, the J-shaped attack may make hunting more efficient for larval clownfish, which in turn could make growing up into adulthood a little bit easier.