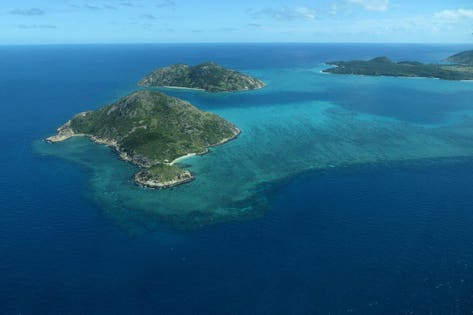 Australia’s Great Barrier Reef is the largest structure on Earth made by living things – tiny coral animals make up the nearly 3,000 reefs off the coast of northeastern Australia. These expansive reefs house what is possibly the most diverse assemblage of fishes (over 1,500 species) in the world. And, as climate change continues to intensify storm activity and increase water temperatures that threaten these coral reefs, it also endangers these fish species that rely on the corals for food and habitat. Now, a new study examining the populations of seaweed-eating fishes across 16 reefs near Lizard Island shows that the fishes’ survival after a cyclone or thermal bleaching event occurs can depend on where the fish are situated on the reef.

“Until now, we haven’t known whether these different communities respond in the same way to environmental disturbances or whether specific local conditions might result in different community responses whether close to the mainland or further from shore,” says lead author Eva McClure.

The scientists studied how fish populations changed in parts of the reef closest to the mainland (the inner reefs), the reefs furthest offshore (the outer-shelf reefs), and the part of the reef between those two areas (the middle-shelf reef). Coral reef habitat and fish assemblages were surveyed eight years before and a few months after two intense cyclones and the extreme thermal bleaching event of 2016.

Although the amount of fish in the inner-shelf remained stable and those in the middle- and outer-shelves increased after the reefs were devastated by environmental disturbances,  there was a steep decline in species diversity across all reefs, with decreases in species that are especially dependant on the reef’s physical structure.

The Australian Great Barrier Reef from a Helicopter.NickJ | Wikimedia Commons

According to co-author Dr. Andrew Hoey, “… This tendency towards individual and community similarity is increasingly considered one of the most pressing, but largely unrecognized, biodiversity crises faced globally.”

The decrease in fish species diversity likely occurred because the cyclones and bleaching events destroyed coral tissues, causing some fish to perish while driving others to unaffected reefs. This dispersal of fishes to other reefs can have cascading effects on the recovery of damaged reefs.

“After widespread loss of corals due to large storms or severe coral bleaching events, herbivorous reef fish are vital for removing seaweed that starts to grow over the dead corals, so that new corals can grow, and surviving corals can recover,“ says Dr. Laura Richardson, a co-author on this study, “[But], the increased number of herbivorous fish on some reefs in this study is highly promising as they can help prevent the proliferation of seaweed after these huge disturbances.”