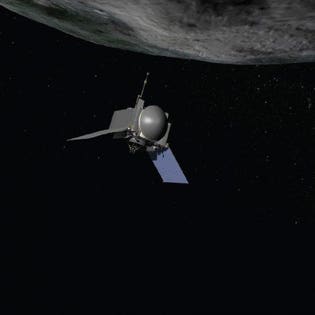 In my last Asteroid News post, I said that March was going to be an exciting month and it did not disappoint. Hubble watched an asteroid in its disintegration process and the ORISIS-REx mission had some unexpected surprises from Bennu.

Hubble was able to observe an asteroid that is spinning fast enough to cast off material in two comet tails. This asteroid is over 200 million miles from the sun and is about 25 miles wide. This is only the second asteroid in history whose disintegration has been linked to a process called a YORP effect. Named after the scientists that developed the concept the Yarkovsky–O’Keefe–Radzievskii–Paddack effect happens when sunlight heats up the surface and infrared radiation escapes with angular momentum. This creates just a little bit of torque which over time cause the asteroid to spin faster and faster. Eventually, you get what Hubble saw, a spinning asteroid with material flying off of it.

To learn more about Gault and its disintegration please visit the NASA website.

NASA’s OSIRIS-REx spacecraft has been orbiting an asteroid called Bennu since Dec 31st of last year. In that short amount of time, the asteroid has shown scientists a few surprises. The most exciting of which is particle plumes erupting from the surface. These plumes were not seen until the craft was orbiting the surface at a distance of about 1 mile. The plumes do not pose a threat to the craft but were not something that they were expecting to see. Now the team will add the tasks of figuring out what is causing these eruptions and their composition to their mission.

To learn more about Bennu’s surprises visit the NASA website.

As always here is the list of the objects that will come close to Earth in the coming month.