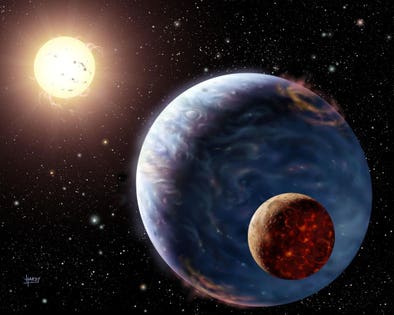 Illustration of an exoplanetary system, potentially with an exomoon orbiting it. While we have yet to find a true ‘Earth-twin’ system, with an Earth-sized planet with a Moon-sized moon in the habitable zone of a Sun-like star, it may be possible in the not-too-distant future.

Even though the ingredients for life have been confirmed to be practically everywhere we look, the only world where we’ve definitively confirmed its existence is Earth. Exoplanet science has exploded over the past 30 years, and we’ve learned of many worlds that are not only potentially habitable, but quite different from our own. We’ve found super-Earths, which may yet be rocky with thin, life-supporting atmospheres. We’ve found Earth-sized and smaller worlds around dwarf stars at the right temperatures for liquid water. And we’ve found giant planets whose moons, yet undiscovered, might have the capacity to support life.

But do Earth-like worlds need a large moon to make life possible? Could large moons around giant planets support life? And what are our detection capabilities for exomoons today? That’s what Patreon supporter Tim Graham wants to know, asking:

[A]re we capable of finding exoplanets in [their] habitable zone with a large moon?

Let’s look at the limits of our modern scientific capabilities, and see what it’ll take to get there.

Kepler-90 is a Sun-like star, but all of its eight planets are scrunched into the equivalent distance of Earth to the Sun. The inner planets have extremely tight orbits with a “year” on Kepler-90i lasting only 14.4 days. In comparison, Mercury’s orbit is 88 days. There is much left to discover, still, about this system, including whether any of these worlds possess exomoons.

Right now, there are a few successful ways we have of detecting and characterizing exoplanets around stars. The three most common, powerful, and prolific, though, are as follows:

Each one of these methods has implications for exomoon detection, too.

This visible-light image from the Hubble shows the newly discovered planet, Fomalhaut b, orbiting its parent star. This is the first time a planet was ever observed beyond the solar system using visible light. However, it will take a further advance in direct imaging to reveal an exomoon.

To directly image an exoplanet, the big challenge is to filter out the light from its parent star. This typically only happens for large planets that both emit their own (infrared) radiation and are sufficiently far from their parent star that the much-brighter star doesn’t overwhelm the planet’s intrinsic brightness. In other words, this helps us find large-mass exoplanets at large orbital radii from their stars.

But if an exoplanet also contains a moon around it, the challenges of direct imaging are even more problematic. The moon-planet separation distance will be smaller than for the planet-star system; the absolute irradiance of the moon will be very small; the planet itself is not resolvable as more than a single pixel. But if the exomoon is tidally heated, like Jupiter’s moon Io is, it may shine very brightly. It cannot reveal an Earth-like planet with a Moon-like moon, but direct imaging may some day reveal exomoons after all.

The radial velocity (or stellar wobble) method for finding exoplanets relies on measuring the motion of the parent star, as caused by the gravitational influence of its orbiting planets.

The radial velocity (also known as the stellar wobble) method was, early on, the most successful way we had of discovering exoplanets. By measuring the light coming from a star over long stretches of time, we could identify long-term, periodic redshifts and blueshifts layered atop one another. When you have a star gravitationally pulling on an orbiting planet, the planet also pulls back on the star. If the planet is massive enough, and/or orbits the star enough times to build up an identifiable, periodic signal, we can unambiguously announce a detection.

The problem with using this technique to search for exomoons is that a planet-moon system would have the same exact effect as a planet located in the center-of-mass of that system with a slightly larger (planet + moon) mass. For that reason, the radial velocity method won’t reveal exomoons.

If there were an exomoon orbiting an exoplanet that transited its star, it could affect the timing of the transit, the duration of the transit, and it could create a new transit all on its own. This is the most promising method for revealing exomoons.

But the last major current method — the transit method — offers some enticing possibilities. When an exoplanet is aligned just right with our line-of-sight, we can observe it appear to pass in front of the star it orbits, blocking a tiny fraction of its light. Since exoplanets simply orbit their stars in an ellipse, we should be able to find a transiting exoplanet as a periodic dimming variation of a specific duration each time it passes by.

The Kepler mission, which has been our most successful planet-finder to date, relied exclusively on this method. Its success over the past decade has brought thousands of new exoplanets to our attention, with over half of them later being confirmed by other methods, providing us with both a radius and a mass for the planet in question. Compared to all the other ways we have of finding and detecting exoplanets, the transit method stands out as the most successful.

An illustration of NASA’s TESS satellite and its capabilities of imaging transiting exoplanets. Kepler has given us more exoplanets than any other mission, and it revealed them all through the transit method. We are looking to extend our capabilities even farther, using the same method with superior equipment and techniques.

But it also has the potential to reveal exomoons. If you had only a single planet orbiting its parent star, you’d expect periodic transits that you could predict to occur at exactly the same time with every orbit. But if you had a planet-moon system, and it was aligned with your line-of-sight, the planet would appear to move forward as the moon orbited to the trailing side, or backwards as the moon orbited to the leading side.

This would mean that the transits we observed wouldn’t necessarily occur with the exact same periods as you’d naively expect, but with a period that was perturbed by a small, significant amount every orbit. The presence of an exomoon could be detected with this additional transit timing variation superimposed atop it.

When a planet possesses a large moon, it no longer behaves as though the moon orbits the planet, rather both bodies orbit their mutual center of mass. As a result, the planet’s motion is affected too. The location of an exomoon in orbit at a particular instant, such as during a transit, will affect the position, timing, and duration of its parent exoplanet’s transit.

Additionally, an exomoon would change the duration of a transit. If an exoplanet moves at the same, constant speed every time it transits across the face of its parent star, each transit would exhibit the same duration. There would be no variations in the amount of time measured for each dimming event.

The transit duration variations, when combined with the transit timing variations, would reveal an unambiguous signal of an exomoon, along with many of its properties.

When a properly-aligned planet passes in front of a star relative to our line-of-sight, the overall brightness dips. When we see the same dip multiple times with a regular period, we can infer the existence of a potential planet.

But, by far, the best possibility we have today is through direct measurement of a transiting exomoon. If the planet that’s orbiting the star can make a viable transiting signal, then all it will take is the same serendipitous alignment to have its moon transit the star, and sufficiently good data to tease that signal out of the noise.

This is not a pipe dream, but something that has already occurred once. Based on data taken by NASA’s Kepler mission, the stellar system Kepler-1625 is of particular interest, with a transiting light curve that not only displayed the definitive evidence of a massive planet orbiting it, but of a planet that wasn’t transiting with the exact same frequency you’d expect orbit after orbit. Instead, it was exhibiting this transit timing variation effect we discussed earlier.

Based on the Kepler lightcurve of the transiting exoplanet Kepler-1625b, we were able to infer the existence of a potential exomoon. The fact that the transits didn’t occur with the exact same periodicity, but that there were timing variations, was our major clue that led researchers in that direction.

So what could we do to go a step further? We could image it with an even more powerful telescope than Kepler: something like Hubble. We went ahead and did exactly that, and discovered that, lo and behold, we didn’t get something consistent with a single planet. Three things happened all in a row:

All of this was consistent with exactly what you’d expect for an exomoon.

Now, this doesn’t definitively prove that we’ve detected an exomoon, but it is far and away the best exomoon candidate we have today. These observations have enabled us to reconstruct a potential mass and size for the exoplanet and the exomoon, and the planet itself is approximately Jupiter’s mass, while the moon is Neptune’s mass. Although it would take a second observed Hubble transit to confirm it, it has already caused us to rethink what exoplanet and exomoon habitability might look like.

When Hubble pointed at the system Kepler-1625, it found the initial transit of the main planet began an hour earlier than anticipated, and was followed by a second, smaller transit. These observations were absolutely consistent with what you’d expect for an exomoon present in the system.

This illustration shows the relative sizes and distances of the exoplanet Kepler-1625b and its exomoon candidate, Kepler-1625b-I. The worlds are approximately the sizes and masses of Jupiter and Neptune, respectively, and are shown to scale.

But it should be close in short order. Right now, NASA’s TESS satellite is scouring the stars closest to Earth for transiting exoplanets. This won’t reveal the exomoons we’re looking for, but it will reveal the locations where the best tool we’ll have for finding them — the James Webb Space Telescope — should point. While Webb might not be able to get a clean signal for an Earth-sized exomoon, it should be able to use the three methods together of transit timing variation, transit duration variation, and direct transits (measured many times and stacked atop one another) to find the smallest, closest exomoons that are out there.

This is an illustration of the different elements in NASA’s exoplanet program, including ground-based observatories, like the W. M. Keck Observatory, and space-based observatories, like Hubble, Spitzer, Kepler, Transiting Exoplanet Survey Satellite, James Webb Space Telescope, Wide Field Infrared Survey Telescope and future missions. The power of TESS and James Webb combined will reveal the most Moon-like exomoons to date, possibly even in their star’s habitable zone.

The most likely scenario is that we’ll find them around red dwarf stars, far closer in than Mercury is to the Sun, because that’s where detections are most favorable. But the longer we observe, the farther out we push that radius. Within the next decade, no one would be surprised if we had an exomoon around an exoplanet located in its star’s habitable zone.

The Universe awaits. The time to look is now.

Send in your Ask Ethan questions to startswithabang at gmail dot com!