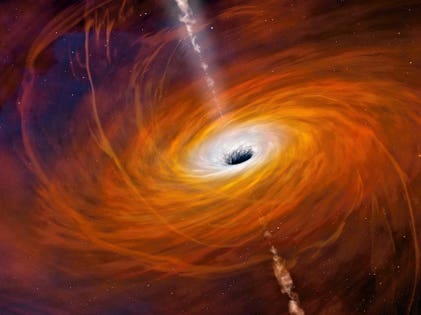 An illustration of an active black hole, one that accretes matter and accelerates a portion of it outwards in two perpendicular jets. The normal matter undergoing an acceleration like this describes how quasars work extremely well. The matter that falls into a black hole, of any variety, will be responsible for additional growth in both mass and event horizon size for the black hole, whether it’s normal matter or dark matter.

Black holes are some of the most extreme objects in the Universe: the only locations where there’s so much energy in a tiny volume of space that an event horizon gets created. When they form, atoms, nuclei, and even fundamental particles themselves are crushed down to an arbitrarily small volume — to a singularity — in our three-dimensional space. At the same time, everything that falls past the event horizon is forever doomed, simply adding to the black hole’s gravitational pull. What does that mean for dark matter? Patreon supporter kilobug asks:

How does dark matter interact with black holes? Does it get sucked into the singularity like normal matter, contributing to the mass of the black hole? If so, when the black hole evaporates through Hawking radiation, what happens to [it]?

To answer this, we have to start at the beginning: with what a black hole actually is.

The very first launch from NASA’s Cape Kennedy space center was of the Apollo 4 rocket. Although it accelerated no faster than a sportscar, the key to its success was that the acceleration was sustained for so long, enabling payloads to escape Earth’s atmosphere and enter orbit. Eventually, multi-stage rockets would enable humans to escape the gravitational pull of the Earth entirely. The Saturn V rockets later took humanity to the Moon.

If you balance these energies, you can derive your escape velocity: how fast you’d have to make an object go for it to eventually achieve an arbitrarily large distance away from the Earth. Even though the Earth has an atmosphere, providing resistance to that motion and requiring us to impart even more energy to a payload than the escape velocity would imply, escape velocity is still a useful physical concept for us to consider.

If the Earth had no atmosphere, then firing a cannonball at a particular speed would be enough to determine whether it fell back to Earth (A, B), remained in a stable orbit around Earth (C, D), or escaped from Earth’s gravitational pull (E). For all objects that aren’t black holes, all five of these trajectories are possible. For objects that are black holes, trajectories like C, D, and E are impossible inside the event horizon.

For our planet, that calculated speed — or escape velocity — is somewhere around 25,000 mph (or 11.2 km/s), which the rockets we’ve developed on Earth can actually achieve. Multi-stage rockets have been launching spacecraft beyond the reach of Earth’s gravity since the 1960s, and out of even the Sun’s gravitational reach since the 1970s. But this is still only possible because of how far away we are from the surface of the Sun at the location of Earth’s orbit.

If we were instead on the surface of the Sun, the speed we’d need to achieve to escape the Sun’s gravitational pull — escape velocity — would be much greater: about 55 times as great, or 617.5 km/s. When our Sun dies, it will contract down to a white dwarf, of about 50% the Sun’s current mass but only the physical size of Earth. In this case, its escape velocity will be about 4.570 km/s, or about 1.5% the speed of light.

Sirius A and B, a normal (Sun-like) star and a white dwarf star. There are stars that get their energy from gravitational contraction, but they are the white dwarfs, which are millions of times fainter than the stars we’re more familiar with. It wasn’t until we understood nuclear fusion that we began to comprehend how stars shine.

There’s a valuable lesson in comparing the Sun, as it is today, to the Sun’s far-future fate as a white dwarf. As more and more mass gets concentrated into a small region of space, the speed required to escape this object rises. If you allowed that mass density to rise, either by compressing it into a smaller volume or adding more mass to the same volume, your escape velocity would get closer and closer to the speed of light.

That’s the key limit. Once your escape velocity at the object’s surface reaches or exceeds the speed of light, it isn’t just that light can’t get out, it’s mandatory (in General Relativity) that everything within that object inevitably collapses down to and/or falls into the central singularity. The reason is simple: the fabric of space itself falls towards the central regions faster than the speed of light. Your speed limit is less than the speed at which the space beneath your feet moves, and hence, there’s no escape.

Both inside and outside the event horizon, space flows like either a moving walkway or a waterfall, depending on how you want to visualize it. At the event horizon, even if you ran (or swam) at the speed of light, there would be no overcoming the flow of spacetime, which drags you into the singularity at the center. Outside the event horizon, though, other forces (like electromagnetism) can frequently overcome the pull of gravity, causing even infalling matter to escape.

So if you’re at any point away from a central singularity and you’re trying to hold a more distant object up against gravitational collapse, you can’t do it; collapse is inevitable. And the most common way to crest past this limit in the first place is simple: just begin with a star more massive than about 20-40 times the mass of our Sun.

Like all true stars, it lives its life by burning through the nuclear fuel in its core region. When that fuel gets used up, the center implodes under its own gravity, creating a catastrophic supernova explosion. The outer layers are expelled, but the central region, being massive enough, collapses to a black hole. These “stellar mass” black holes, spanning an approximate range from 8-to-40 solar masses, will grow over time, as they consume any matter or energy that dares to venture too nearby. Even if you move at the speed of light when you cross the event horizon, you’ll never get out again.

The anatomy of a very massive star throughout its life, culminating in a Type II Supernova. At the end of its life, if the core is massive enough, the formation of a black hole is absolutely unavoidable.

Nicole Rager Fuller for the NSF

From outside a black hole, we have no way to gain information about what it was initially composed of. A (neutral) black hole made from protons and electrons, neutrons, dark matter, or even antimatter would all appear identical. In fact, there are only three properties at all that we can observe about a black hole from an external location:

An illustration of heavily curved spacetime, outside the event horizon of a black hole. As you get closer and closer to the mass’s location, space becomes more severely curved, eventually leading to a location from within which even light cannot escape: the event horizon. The radius of that location is set by the mass, charge, and angular momentum of the black hole, the speed of light, and the laws of General Relativity alone.

Dark matter, even though we know what it is, is known to have mass but not electric charge. The angular momentum it adds to the black hole is entirely dependent on its initial infalling trajectory. If you were interested in other quantum numbers — for example, because you were thinking about the black hole information paradox — you’d be chagrined to learn that dark matter doesn’t have them.

Dark matter has no color charge, baryon number, lepton number, lepton family number, etc. And because black holes form from the deaths of supermassive stars (i.e., normal, baryonic matter), the initial composition of a newly-formed black hole is always approximately 100% normal matter and 0% dark matter. Even though there’s no definitive way to tell what black holes are made of from the outside alone, we’ve witnessed the direct formation of a black hole from a progenitor star; no dark matter was involved.

The visible/near-IR photos from Hubble show a massive star, about 25 times the mass of the Sun, that has winked out of existence, with no supernova or other explanation. Direct collapse is the only reasonable candidate explanation, and is one known way, in addition to supernovae or neutron star mergers, to form a black hole for the first time.

Black holes tend to form in the inner regions of the galaxy, where the normal matter is dominant over dark matter. Consider just the region of space where we’re located: around our Sun. If we drew a sphere that was 100 AU in radius (where one AU is the distance of the Earth from the Sun) around our Solar System, we’d enclose all the planets, moons, asteroids and pretty much the entire Kuiper belt. We’d also enclose a fair amount of dark matter in that volume.

Quantitatively, though, the baryonic mass — the normal matter — inside this sphere would be dominated by our Sun, and would weigh about 2 × 1030 kg. (Everything else, combined, adds just another 0.2% to that total.) On the other hand, the total amount of dark matter in that same sphere? Only about 1 × 1019 kg, or just 0.0000000005% the mass of the normal matter in that same region. All the dark matter combined is about the same mass as a modest asteroid like Juno.

In the solar system, to a first approximation, the Sun determines the orbits of the planets. To a second approximation, all the other masses (like planets, moons, asteroids, etc.) play a large role. But to add in dark matter, we’d have to get incredibly sensitive: the entire contribution of all the dark matter within 100 AU of the Sun is about the same contribution as the mass of Juno, the asteroid belt’s 11th largest asteroid (by volume).

Encoded on the surface of the black hole can be bits of information, proportional to the event horizon’s surface area. When the black hole decays, it decays to a state of thermal radiation. Whether that information survives and is encoded in the radiation or not, and if so, how, is not a question that our current theories can provide the answer to.

This process may take anywhere from 1067 to 10100 years, depending on the black hole’s mass. But what comes out is simply thermal, blackbody radiation.

The event horizon of a black hole is a spherical or spheroidal region from which nothing, not even light, can escape. Although conventional blackbody radiation is emitted from outside the event horizon, it is unclear where, when, or how the entropy/information encoded on the surface behaves in a merger scenario.

Dark matter is neither a good food source for black holes, nor is it (information-wise) an interesting one. What a black hole gains from eating dark matter is no different than what it gains from shining a flashlight into it. Only the mass/energy content, like you’d get from E = mc2, matters. Black holes and dark matter do interact, but their effects are so small that even ignoring dark matter entirely still gives you a great description of black holes: past, present, and future.

Send in your Ask Ethan questions to startswithabang at gmail dot com!