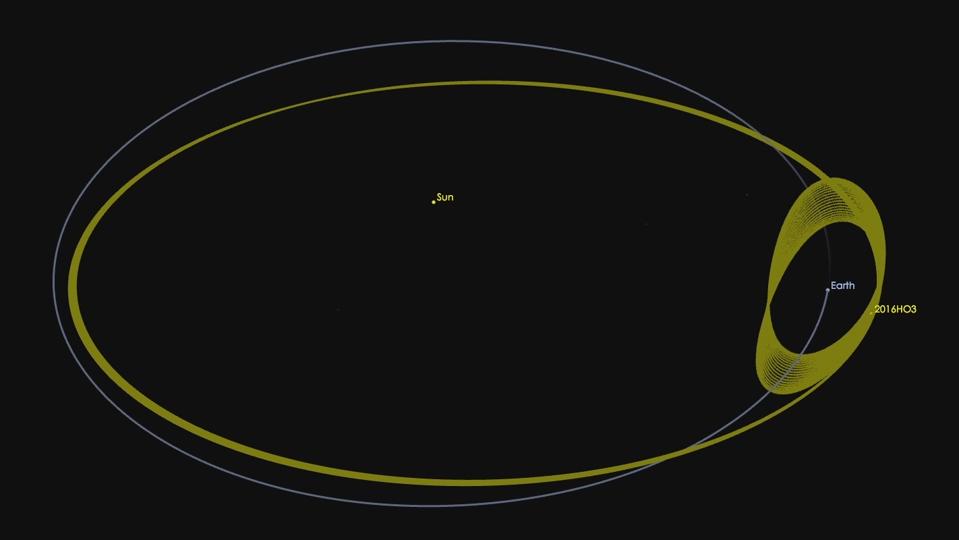 Are there relic alien spacecraft on asteroids close to Earth that may have been observing the planet for longer than humans have existed?

A fascinating new theory that near-Earth ‘companion’ asteroids may contain live or ancient robotic probes sent from faraway civilizations comes from Dr. James Benford at Microwave Sciences in Lafayette, California, whose paper “Looking for Lurkers: Co-Orbiters as SETI Observables,” is published this week in the Astronomical Journal.

Before you dismiss it as crazy talk, consider that Benford thinks that by ruling-out the presence of alien probes and extraterrestrial archeology on rocks that are often close to Earth would bring us to a profound conclusion: there is no-one out there and we’re truly alone.

What are co-orbital objects?

In this context, a co-orbital is an asteroid that goes around the Sun on the same, or similar, orbital path to Earth. Co-orbital objects approach Earth very closely every year at distance is much shorter than anything except the moon.

Consequently, co-orbitals could be a great place to watch Earth from. Not only would any alien probes on co-orbital objects be concealed, but they would also be anchored and able to access solar energy. They could possibly sustain themselves for many thousands of years.

According to Benford, a lurker is a hidden, unknown and unnoticed observing probe, and they could have been sent to observe Earth long ago. “They may respond to an intentional signal and may not, depending on unknown alien motivations,” reads a news release covering Benford’s new paper. “Lurkers would likely be robotic, like our own Voyager and New Horizons probes.” The space probes currently the furthest from us, Voyagers 1 and 2 (launched in the late 1970s) and New Horizons (launched in 2006 and the fastest man-made object ever launched from Earth) have gotten much further than the outskirts of our own solar system.

There’s also obviously a limit to how long any alien space probes sent to study Earth could last. “Perhaps probes are waiting on these objects, listening to us and waiting for us to find them” reads the paper. “They may remain silent and simply report back to wherever they communicate to”. Benford suggests that if we did find such a “lurker” we could simply photograph it and send it in a message simply to say “we see you” and wake the probe from its passive state.

The idea is loosely inspired by the concept of using a Bracewell probe for allowing widely separated civilizations to communicate.

How crazy is this theory?

At first glance, it’s way out there, but Benford thinks that the process of looking for relic alien spacecraft in Earth’s cosmic backyard is critical in us understanding the possibility of extra-terrestrial intelligence in our galaxy. “If we find nothing there, this gives us a profound result: no one has come to look at the life of the Earth, which has been evident in our atmosphere in spectral lines over interstellar distances for over a billion years.” Spectral lines from light are used by astronomers to identify atoms, molecules and elements present in a planet.

Benford is arguing that if we find nothing on the co-orbital objects around Earth, then the chances of there being more advanced alien civilisations anywhere in our galaxy become more remote.

Between 120 and 300 ft. in diameter and also known as ‘Earth’s Constant Companion’ by NASA, 2016 HO3 is the smallest, closest, and most stable known quasi-satellite of Earth. Discovered on April 27, 2016, by the Pan-STARRS 1 asteroid survey telescope on Haleakala, Hawaii, 2016 HO3 loops around the Earth every year during Earth’s orbit of the Sun. It’s been stable for at least 100 years and will remain so for many hundreds of years to come. However, 2016 HO3 is always at least nine million miles away, so never a threat to Earth.

Benford thinks we should study co-orbital objects both in the electromagnetic spectrum of microwaves and light, and also using planetary radar.

Getting to 2016 HO3 from Earth orbit requires relatively little rocket propulsion, so it’s no surprise that the China National Space Administration (CNSA) has announced plans to send a probe. A robotic mission that would return samples could launch in 2024.

The search for extraterrestrial life is currently focused on distant exoplanets. It’s a sobering thought that asteroids in our own celestial backyard may have hosted alien probes sent to study Earth many thousands of years ago by extraterrestrial civilizations.