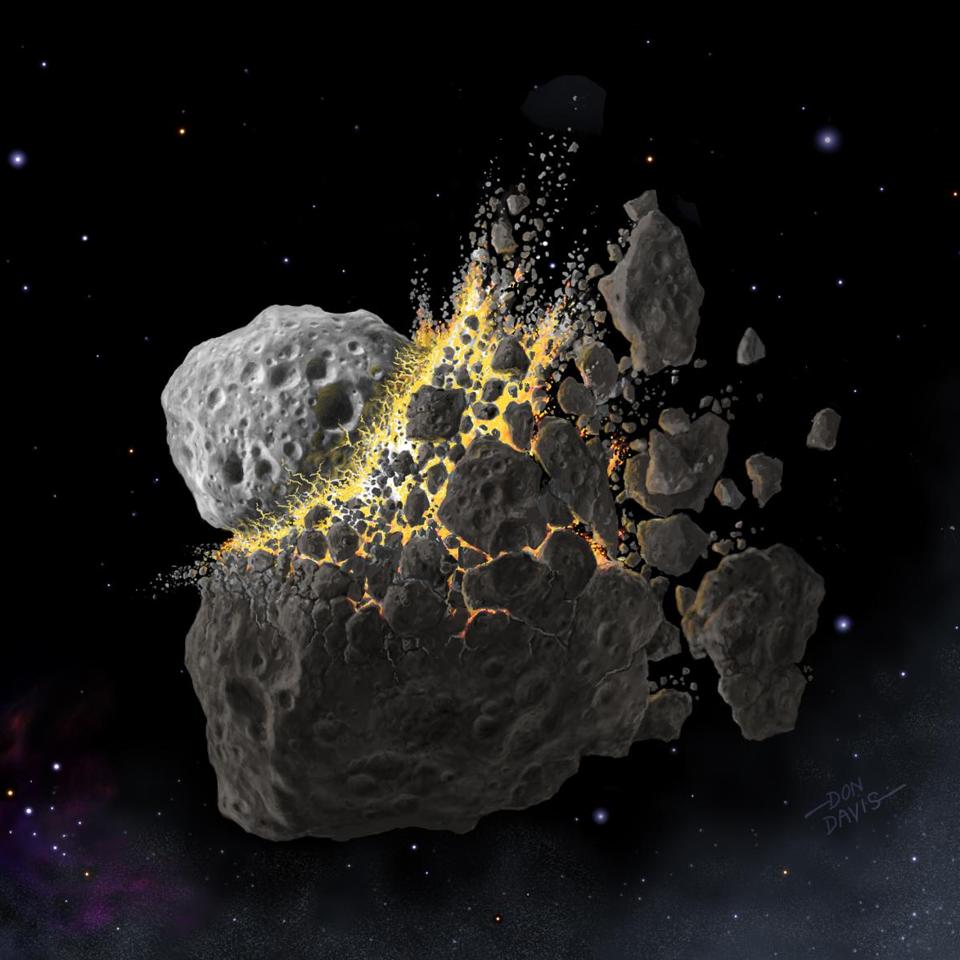 The evolution of life on Earth sometimes depends on astronomical events. We know this from the case of the dinosaurs, which were wiped out by a 10 km asteroid or comet striking the Yucatán Peninsula in Mexico about 66 million years ago.

However, scientists have only just discovered that a major ice age many millions of years before was triggered by an asteroid collision in the solar system.

Could this unexpected discovery help in tackling global warming?

In the paper “An extraterrestrial trigger for the mid-Ordovician ice age: Dust from the breakup of the L-chondrite parent body” published in Science Advances, researchers at the Field Museum in Chicago, Lund University in Sweden, and others, argue that the breakup of a major asteroid 466 million years ago filled the entire inner solar system with enormous amounts of dust that lead to an ice age.

How big was the asteroid?

Calculations put the asteroid in question at about 93 miles wide. However, instead of striking Earth, this asteroid simply broke apart in the asteroid belt between Mars and Jupiter and created a lot more dust than usual in the inner solar system. It was the largest documented breakup during the past three billion years, and its break-up still delivers almost a third of all meteorites falling on Earth today, according to the paper.

What is space dust?

Earth always has some space dust in its atmosphere, as well as dust from volcanoes, deserts, and sea salt. In the present stratosphere, extraterrestrial dust represents 1% of all the dust and has no climatic significance. “Normally, Earth gains about 40,000 tons of extraterrestrial material every year,” says Philipp Heck, a curator at the Field Museum, associate professor at the University of Chicago, and one of the paper’s authors. “Our hypothesis is that the large amounts of extraterrestrial dust over a timeframe of at least two million years played an important role in changing the climate on Earth, contributing to cooling,” says Heck.

Essentially by blocking the Sun’s light. It was already known that Earth’s climate cooled-off 466 million years ago, but just how “Ordovician icehouse conditions” were triggered or intensified has until now been a mystery. Basically, the blocking effect of the dust partially stopped sunlight reaching Earth and an ice age began. “It is analogous to standing the middle of your living room and smashing a vacuum cleaner bag, only at a much larger scale,” says Birger Schmitz, professor of geology at Lund University and the leader of the study. “Our results show for the first time that such dust, at times, has cooled Earth dramatically.”

The arrival of all that space dust happened so gradually–actually over at least two million years–that life was able to adapt to the changing temperatures, leading to an explosion of new species. This is called the “Great Ordovician Biodiversification Event”.

How did the researchers figure this out?

They looked for traces of space dust in 466 million year old rocks, and compared it to tiny micrometeorites from Antarctica. “We studied extraterrestrial matter, meteorites and micrometeorites, in the sedimentary record of Earth, meaning rocks that were once sea floor,” says Heck about the study of petrified sea floor sediments at Kinnekulle in southern Sweden. “And then we extracted the extraterrestrial matter to discover what it was and where it came from.” Extracting the extraterrestrial matter was a was a painstaking process since the ancient rocks had to be treated with acid to eat away the stone and leave the “space stuff” to be chemically analyzed. They found helium atoms missing a neutron–a sure sign of being shot out of the Sun–as well as rare metals often found in asteroids.

In short, the dust from the asteroid was enriched with helium after being bombarded by the solar wind on its way to Earth. “This result was completely unexpected,” says Schmitz. “It wasn’t until we got the last helium measurements that everything fell into place.”

How could it help fight global warming?

“We’re talking about timescales of millions of years,” says Heck. “It’s very different from the climate change caused by the meteorite 65 million years ago that killed the dinosaurs, and it’s different from the global warming today–this global cooling was a gentle nudge.”

However, the unexpected discovery could be relevant for tackling global warming if carbon dioxide emissions are not reduced. So could we replicate the dust shower that triggered global cooling 466 million years ago? It may be possible to place asteroids in orbits around Earth in such a way that they continuously shed dust and partially block sunlight from reaching Earth. Heck thinks such a scheme would be very risky. “Geo-engineering proposals should be evaluated very critically and very carefully, because if something goes wrong, things could become worse than before,” he says. However, this knowledge could be useful. “We’re experiencing global warming, it’s undeniable, and we need to think about how we can prevent catastrophic consequences, or minimize them,” he says. “Any idea that’s reasonable should be explored.”

“Our results show for the first time that such dust at times has cooled Earth dramatically,” says Schmitz.”Our studies can give a more detailed, empirical based understanding of how this works, and this in turn can be used to evaluate if model simulations are realistic.”