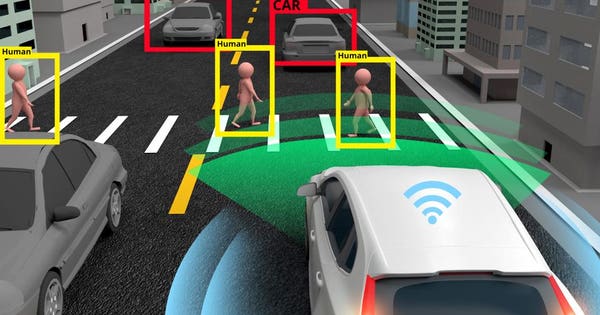 Over the weekend I ended up playing cards against humanity, and obviously, playing with physicists, LIDAR came up. I was surprised that I had not heard of LIDAR before. So, I wanted to write an article with some facts on LIDAR for those of you that might not have heard about LIDAR too.

LIDAR works by sending out pulses of laser light. These pulses of light then reflect off surrounding objects and are recorded. The time between the output laser pulse and the reflected pulse can allow one to infer the distance to the object in question.

If there are gaps in the object, say, a tree with branches, some of the light can be reflected by the first branches, and the rest of the light can travel through and bounce off other branches. As a result, the reflected signal can have multiple peaks of varying heights depending on how much light is reflected by each surface. This signal with a series of peaks is known as a waveform. With this signal, the topography of the surrounding location can be mapped.

Police drones have LIDAR to detect murder victims, or more widely, for hazard assessments. These can include landslides, floods or tsunamis, to name a few.

In addition to this, you can use different wavelength laser pulses to see different objects. For most topological images of say, forest floors, are mostly imaged with near-infrared lasers. For seafloors, green light that penetrates through water is used to map the surface of riverbeds for instance.

Whilst researching about LIDAR, one of the facts that caught me off guard was that LIDAR has been around since the 60s. Yet, I’ve only heard about it now. One of the first uses of LIDAR was using it to produce accurate topographical maps of locations that included bodies of waters, streets, and other features.

So, those are just a few facts on LIDAR. The future of LIDAR is quite exciting. LIDAR makes up a huge part of self-driving cars. The aim is to use LIDAR to produce camera-like images with a larger range to provide 3D-multi-spectrum environmental information of the car’s surroundings. Watch this space.